A pilgrimage to nowhere

Ever since we first came across them, years ago, we’ve both had a serious hankering for a Tatra. One of the oldest car manufacturers in the world, having built their first car in the late 19th century, this Czech company mainly built trucks – big, beefy off-road trucks.

But, for us, it was definitely the cars. Whilst the 1920s saw some truly lovely little cars, especially the sporty roadster versions of the T57, it was the new science of aerodynamics which brought our favourites into being, from the T77 onwards – long and sleek, with a tapering rear. The engineering was also thoroughly off-beat, too – under the finned tail, louvres fed the air-cooled v8 engines. The chief engineer, Hans Ledwinka, was one of the unsung heroes of automotive history, too – a prototype small car caught the eye of a certain Ferdinand Porsche when Adolf came looking for a Wagen for the Volk.

So, when our route looked like it might take us through the very Eastern tip of the Czech Republic, a tiny little town leapt out from the map. Kopřivnice. 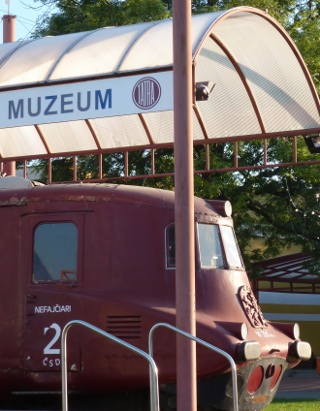 Home to Tatra, and home to a Technical Museum housing many of Tatra’s cars, trucks, aeroplanes; together with engines and chassis – and even a barking mad snowmobile.

As you drive into the centre of town, you can’t miss the museum. It’s the one with a large, beautiful, aerodynamic 1930s train parked outside. We parked up, and went to the door – time was getting on, and we weren’t even sure if it would be open. It was – but only for another half an hour. Nowhere near enough time. The tourist office couldn’t help with any open campsite anywhere in the vicinity, but they did give us a flyer of local hotels, with prices. So, for €15 for a double room, we decided to slum it. The “Hotel Tatra”, right next door to the museum, was considerably pricier – but looked very nice…

The town itself’s not got much else to tell. Apart from the museum, there’s a very nice old square – or, rather, it would be if it wasn’t a mess of roadworks. There’s, umm… A big factory. They still build the trucks here, and we were to see many of them in use through 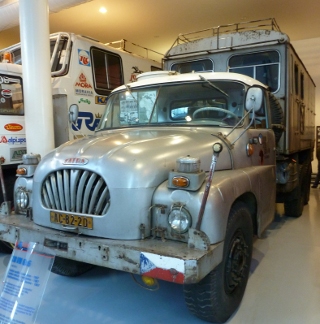 the country. We’d already encountered many of the older trucks in use in the Romanian logging industry – they’re built around a unique style of central backbone chassis, giving very large amounts of axle articulation – and, with all-wheel drive, they’re just what’s needed in the back end of nowhere. They’re also incredibly robust and simple, still using air-cooled engines. The problems of water-cooling are very much at the front of my mind at the moment, but that’s another story…

We weren’t quite queueing up when the doors opened in the morning, but we weren’t far off. Our wander through the museum took us through from a replica of that first car, the Präsident, right through to the end of car production in the 1990s, with the T700. The last of a series of updates to the T613 launched in 1974, it just couldn’t quite cut it in the face of competition from BMW and Mercedes once the Iron Curtain came down.

Personally, my lust has always been for the 1950s to 1970s T603 – perhaps the most compelling reason to be a senior Communist Party member in Czechoslovakia? 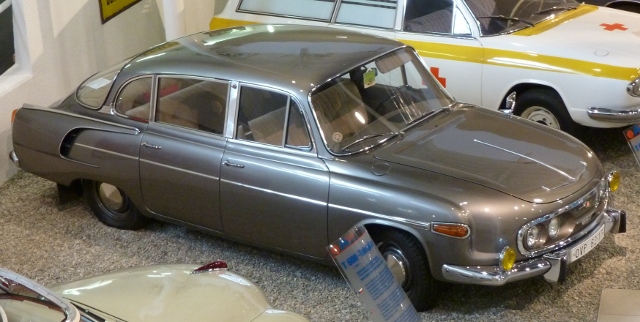 Ellie, on the other hand, has expensive tastes. She’d kill for a T87 – a 1930s jaw-dropper, so beautiful that they even displayed one in the Victoria & Albert museum’s big Art Deco exhibition a few years back.

Having been through the museum, though, with the experiences of the last year and a half behind us, we both got severely tempted by some of the big trucks… Several of those on display had been on long and arduous expeditions, and Tatra has long done very well indeed with the truck categories of the gruelling Paris-Dakar rally. 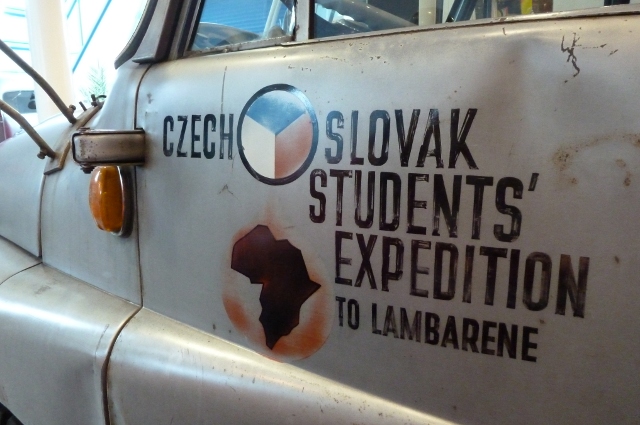 4 Responses to A pilgrimage to nowhere