Our guidebook says that the Komani ferry is “one of the world’s great boat trips, right up there with Norway’s Hurtigrut”. With a recommendation like that, you can’t possibly miss it, can you?

Yet it looked for a while like we might have to do that. We’d been told various contrasting stories about what was happening – it’s running, but it’ll cost you €90 to take the van on; it’s not running at all; it’s running but pedestrian only – that we figured the only way to get the correct information was to just go to Komani and investigate. It’s not the handiest of ferries to get to, either. One end is about 40km of rough track away from the main road, and that’s the easy one. There’s a reason that the ferry’s the viable public transport for a wide area of the country – to take what passes for a road to the other end of the ferry’s route is about 150km.

We arrived at Komani late afternoon, knowing that the boat runs only in the early morning, and having been told of a small campsite shortly before the ferry’s dock. It turned out to be a very pleasant little landscaped area, just next to the hydroelectric plant at the base of the dam forming one end of the long thin artificial lake. After 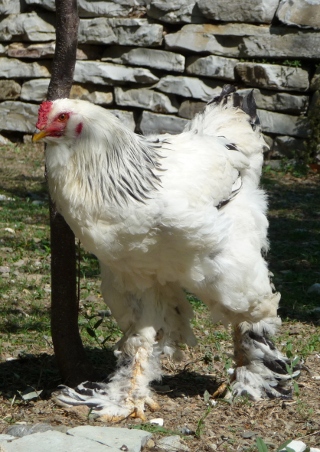 parking the van in amongst a throng of wandering chickens, some apparently wearing furry stilts, it was time to find out what was happening. After suggesting we might like to eat in the “restaurant” (and opening the chest freezer to show us a loose quarter of cow sat next to a couple of large fish by way of menu) the owner, Marko, explained the situation in his excellent Italian – which we just about managed to follow. Apparently, we’d missed the car ferry that morning – and there wasn’t one scheduled until next week… Oh. It might be possible to charter a boat, though – for only €100 or so… Hmm. Eventually, we understood that the CAR ferry might not be running (apparently, it suffered some sudden and drastic buoyancy issues last year) but there was a foot-passenger ferry running every day. A plan started to come together, which we mulled over as we cycled up the road to investigate the dock itself. It might only be 1.5km from our base to the dock, but it took us a good half hour to get there up a VERY steep incline, not helped by the last 500m being through a very under-illuminated narrow and winding tunnel. As we recovered over a desperately needed beer, we received confirmation – yes, the pedestrian boat was running every morning, leaving at 9am. Strangely, the return down the hill only took about five minutes…

The hill seemed, if anything, steeper as we cycled back up at 7.45am, not helped by managing to share the tunnel with several ancient and knackered Mercedes minibus taxis heading to meet the boat. The small dock, empty the previous evening, was a buzz of activity. Luggage was piled everywhere, and the taxis were joined by a much more modern (but similarly knackered) Chinese-made pickup loaded with several cows.

Finally, a small dot appeared around a headland up the water. It grew closer, and formed into a small boat. On the deck of the boat is a throng of people, a pile of luggage and several motorbikes all clustered around a bus. Maybe this IS the vehicle ferry after all? It’s too late to go and get the van. Then, as everybody starts to get off, it becomes clearer. There isn’t a bus on the boat. The bus IS the boat. 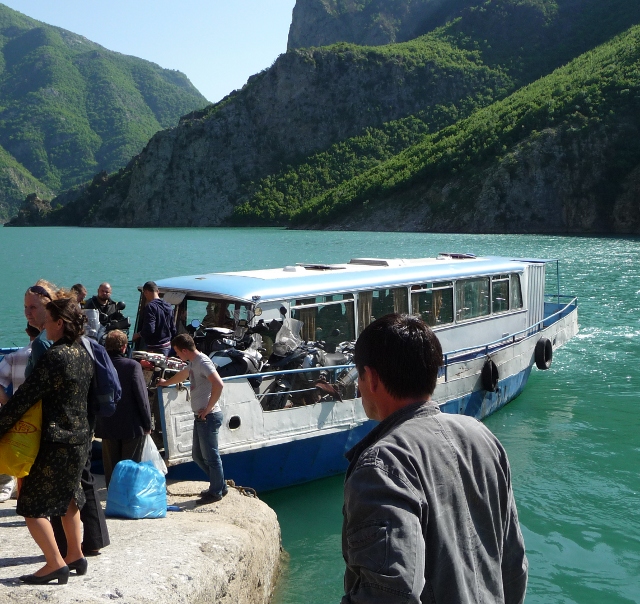 The top of an old coach has been welded onto the hull of the boat to form the cabin. Even the captain uses the driver’s seat of the bus – and the steering wheel.

Against the back of the bus, some bits of old shipping container have been welded into a sort of lean-to forming a toilet, complete with crucifix dangling next to the door. Abandon hope all ye who enter here… 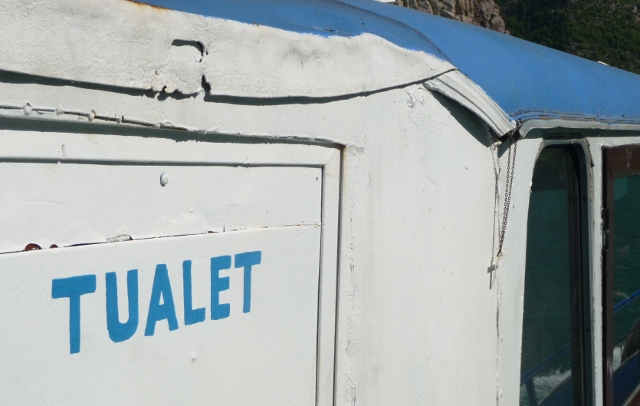 Everybody jostles to load. Our bikes are wheeled up the precarious gangplank and are leaned against the rail, and piles of stuff get stacked on the front of the deck, with the captain gesticulating furiously as it starts to interfere with his view. We’re off. 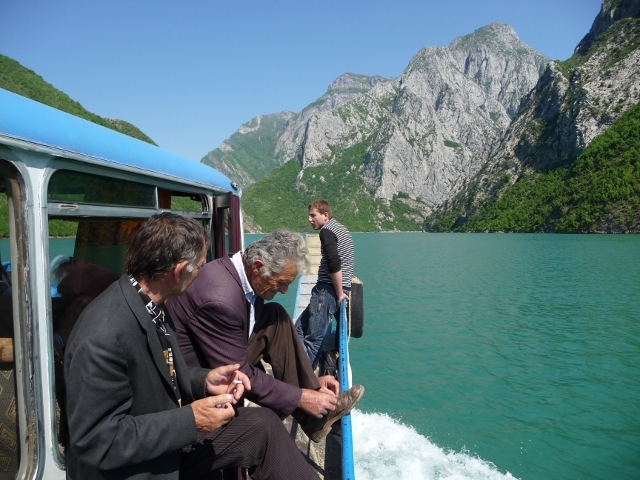 Our fellow passengers are almost all locals, who stay rigidly sat inside the bus except for the odd ciggy break, leaving the walkway around the outside to us and the only other tourists – four Danes whose Albanian driver/guide had seemingly been similarly confused over the status of the boat, with several rapid phone calls

to try to find them alternative transport at the other end whilst he drove round to meet up with them… Fortunately, the cows are not loaded. Nor are the goats which are also meandering around the dock.

For three hours we puttered serenely in a little cloud of diesel smoke, stopping occasionally at utterly improbable pieces of seemingly random sheer hillside. As the boat approaches, people suddenly appear from the undergrowth, ready to leap on board, some carrying outboard motors and sacks of very fresh fish. Some of the passengers on board get off, clambering up the steep and loose shore, no matter how ancient and decrepit they appear to be – or wearing stiletto heels and carrying two small children.

Other than that, there’s not much to say about the boat journey itself. The old adage about the relative values of pictures and thousands of words has never been truer. 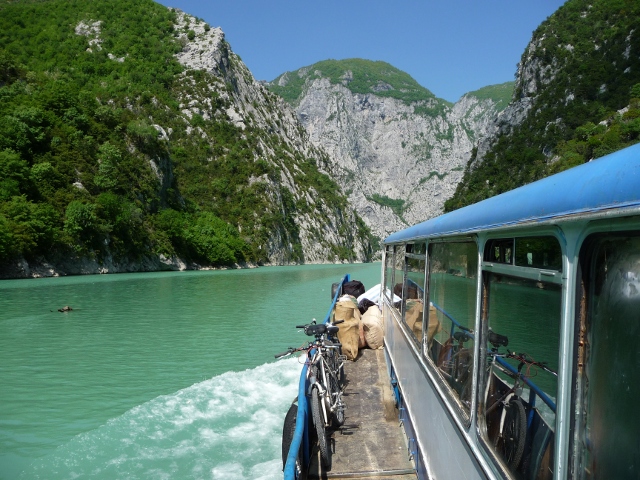 The trip ends next to a couple of shabby car ferries, tied to what appears to be a builder’s yard in the middle of a substantial roadworks site. One of the ferries has been repainted recently, whilst the other is probably about to be. Either way, neither looks ready for use in the immediate future. 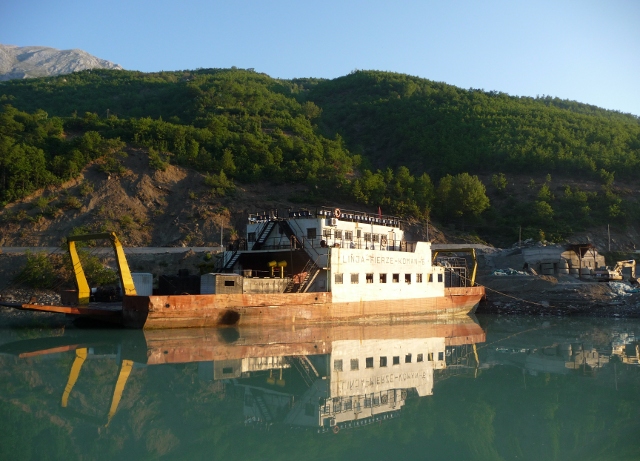 We get off, wondering what to do next. We’re loaded onto the ubiquitus Mercedes van, and our bikes passed up to the roofrack, almost by default. Twenty minutes later, we’re in the middle of Bajram Curri – the great metropolis in these parts.

Actually, Bajram Curri is a surprisingly easy place to waste an afternoon and evening in. Apart from the stunning setting, with snow-capped mountains rising on all sides, the town has a buzz about it. We find the hotel which we’ve been recommended, and investigate the options for rooms. For €20, we could do a lot worse. The room is a decent size, although we can barely open the door to the balcony, and once out there we decide that’s not a great loss. Covered in large piles of pigeon poo and with a view over building sites, it is not inspiring. We go to find some food. The pleasant outdoor bars along the road seem a good first place to look, although they can’t help. No matter. Whilst we sip a beer in the sun, an ice-cream sundae is brought to another table. Mmmm. We flag the waiter down and try to order one. As usual with Albania, communication difficulties are easy to overcome – somebody nearby will get dragged in to help, and so it proves here. No, no food is available. OK, we’ll have another beer and one of those ice-creams. Nothing arrives. Eventually, we give up, pay and leave. We continue to wander, heading into a small clothes shop. As Ellie browses, the girl running the shop is having a video-chat with somebody via her iPhone leant on a shelf. We hear a mention of tourists – that’ll be us. A tinny voice calls out to us from the phone, and we find ourselves having a natter with her sister – who’s living and working in Barking, on the edge of London…

We find a small fast-food shop in the main street. There’s no menu – of course – but the owner is cheerful and speaks good French. He gives us a quick run-down of what’s available, including holding up a Qofte kebab to illustrate his suggestion of a sandwich. Great. That’ll do nicely. But how many? The Qofte he waved about wasn’t large – Ellie says “two”, whilst my rumbling stomach says “four”. We sit down, and before long our food arrives. Ellie has two large bread rolls filled with salad, kebab and chips. So do I. Maybe mine have twice as much meat in? No, wait. It appears the other half of my lunch will be served just as soon as I’m ready…

After that, we really don’t particularly fancy anything to eat that evening, but we know that we’d better – breakfast is unlikely, given that we’re due to get the minibus back to the ferry at HALF PAST FIVE the following morning. So, after another wander around town, we head down to about the only other food option – the hotel’s bar, where pizzas are available. Two cheerful Americans greet us as we walk across the bar, and we join them for a drink. Garrett & Eric are Peace Corps volunteers, who’re half way through their two year stint in the area. Garrett, from Chicago, is working in the local health centre, while Eric, from LA, is teaching English in the high school. We pass a very pleasant evening chatting about the area, and the minor cultural differences from their hometowns…

It’s still dark when the alarm goes off, but has got light by the time we wander out into the main square to wait for the bus. We don’t need to wait – no sooner are we there than it arrives, ten minutes early. This is probably a good thing, as the only other person around is somebody that Garrett & Eric described to us as “the Ghost”. An elderly man, half-buried in a moth-eaten cast-off military uniform several sizes too big for him, he’s shuffling around. Apparently, he’s paid to protect the various businesses in town from burglars. This would seem an incredibly unlikely state of affairs, were it not for the AK47 slung over one of his shoulders. With that, it merely seems hilarious in a vaguely scarily improbable way. We get to the village a couple of kilometres short of the dock, just before the boat’s due to leave at 6am – and that’s where we stop. The driver gets out, and heads into the cafe, joined by most of the other passengers. Twenty minutes later, they return and we head to the boat. Miraculously, it’s waited for us – although, we gather from the two Dutch guys who are the only other tourists on it, that was the matter of some animated discussion amongst the crew. This time, the boat’s deck cargo includes a cement mixer.

It’s much colder as we return, and much of the lake is cast in shadow as the mountains hide the still-rising sun.

As a result, I don my fleece, and my (prescription, needed for driving) sunglasses are on and off. As it warms up, I remove my fleece over my head – forgetting that the sunnies are hanging from the neck. I don’t see them go over the edge of the boat, but it’s the only place they can possibly have gone…

On the way up the lake, the crew had peered into the engine bay on various occasions. On the return, this appears to be more frequent, with each visit taking slightly longer.

The boat keeps throbbing along, though, and for another three hours we cruise gently past isolated houses high up on the hillside. 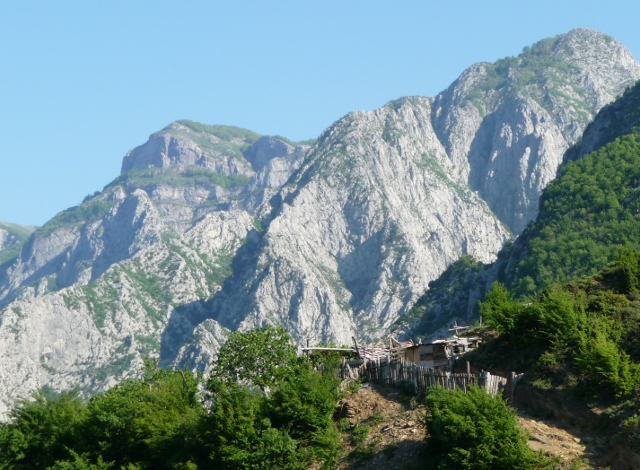 Eventually, we arrive, and the scrum unloading the boat mingles with the scrum loading.

The cargo waiting for the return voyage includes more motorbike travellers, together with a washing machine. It’s all fitted on within ten minutes, and the Komani ferry heads back off down the lake again. For us, this has been an unforgettable return trip through utter beauty. For the people of the region, it’s just a bus ride. 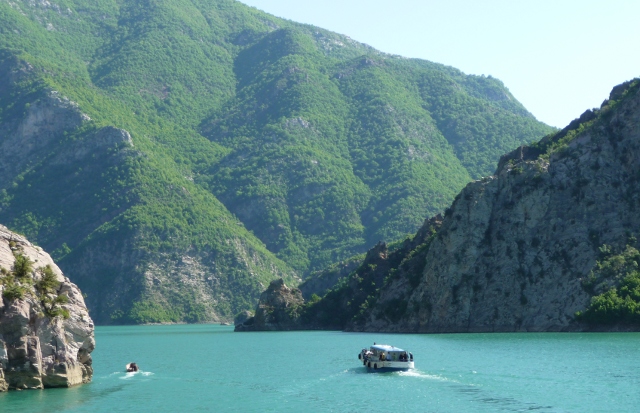 This entry was posted in By Country - Albania, Travel stuff, Uncategorized. Bookmark the permalink.