The road out of Tunis wasn’t straightforward – just getting away from the garage where we’d left the van took us round the edge of the main central market place (in full swing at 10am on a weekday, of course), before we could even start to negotiate unsigned diversions to avoid driving past the Interior Ministry – the armoured cars and razor wire made that main route “inadvisable”…

Our destination was Nabeul, a small town at the base of the Cap Bon peninsula, renowned for pottery and stone-carving. We narrowly missed the weekly market, but easily found the campsite in the grounds of one of the town’s hotels, a few kilometres out of the centre. Not a busy site – just a couple of others there, including an elderly Belgian chap who took his cat for a walk on a lead at frequent intervals, and a German on his way back home after spending a few weeks travelling around the desert in the south, in a somewhat ginormous 4×4 truck. 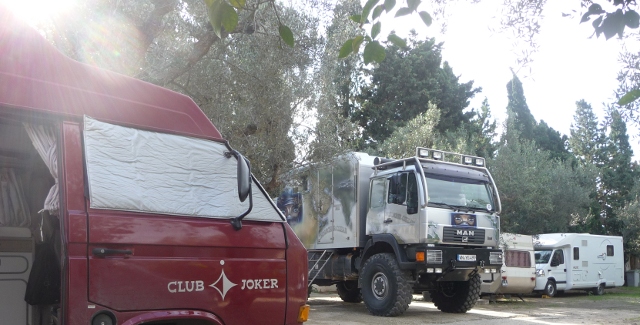 A pleasant day and a half easily passed, just cycling into and out of town, and not doing much. There’s a long pedestrianised street through the heart of the old part of town, lined solidly with “artisanal” tat shops – we did succumb, equipping the van’s kitchen with an olive-wood spatula for a third of the initial asking price… The food market saw much more purchasing, including a citrus squeezer and a bag of Harissa mix powder large enough (and fiery enough) to last us from now until eternity. With delicious, sweet and juicy oranges being piled high on stalls or in the back of pick-up trucks, and costing as little as 10p per kilo, we’re now busy dosing up on nice fresh Vitamin C at every opportunity!

We managed to miss the much-vaunted ceramic workshop tours – we did find one of the locations, firmly locked, but it looked a bit “industrial” anyway – and our attempt to visit the town centre’s museum of local culture, in an old house, was abandoned in short order. We followed the signs into an entrance lobby, and assumed the loud growling was some kind of recorded soundtrack. Realisation dawned as a dog launched out from underneath a bench hidden in the shadows, fangs a-flashing behind a cacophony of barking. I have no idea how close it actually got to us before reaching the end of its chain, but “too close” seems like a good guess. The archeological museum, fortunately, was a much more civilised affair. Small but perfectly formed, containing mosaics and statuary from various local excavations.

The biggest drawback to the Nabeul campsite was quickly found in the morning – icy cold showers… Hot showers were available, by asking for the key to one of the hotel’s empty rooms – but two hot showers added 40% to the night’s camping fee.

Sunday morning, according to our guidebook, saw the neighbouring town of Dar Chaabane host a weekly market selling the wares of the area’s stone-carving workshops. We didn’t find the market, but did find the workshops – and asked the two guys in one of them about it. No, no market here… <shrug> Oh, well. We stood and watched them work for a while, resisting their attempts to carve our names in Arabic script into a slab of marble for us, then headed up the peninsula.

We were now definitely away from the orbit of the big city, in a largely rural area, with a markedly “traditional” way of life apparent as you pass by. Produce was piled high, and firmly monotonous in it’s seasonality – apart from oranges, every other ancient and battered Peugeot 404 pickup was laden to a good foot or so above roof height with fennel, alongside donkey-carts piled high with carrots. 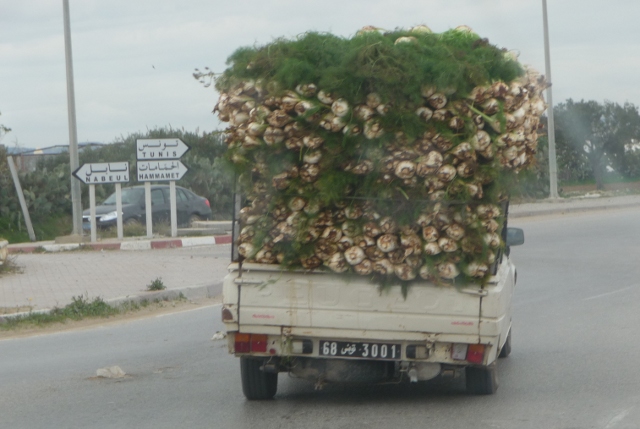 A quick stop was made at the Sunday market at Kouba – Merguez sausages bought for dinner (we weren’t allowed to buy the small number we actually wanted, but were told firmly that we had to have more, since they were only small…), and my toolkit grew yet further, with the addition of a set of pipe-spanners. Unknown in the UK, they’re common in France, and it seems that many fasteners on old Citroens were positioned with them in mind. Whether these are indeed genuine Facom-brand ones, I am unconvinced – most of them have what looks like a genuine logo on them, but one of them doesn’t even have the brand name spelt right. But since half a dozen cost less than a single one in France…

The next town up the coast is Kelibia, home to an imposing fortress on top of a large rock, right on the edge of the coastline. Since the rest of this part of the peninsula is ever-so slightly devoid of anything which could vaguely be termed a hill, the fort is visible for miles around. So visible, in fact, that it seems that we forgot to take a single photograph of it. However, we did have a walk around the ramparts, and saw first-hand the other benefit of the location – one seriously strategic view. Kelibia’s other point of interest for us was some Carthaginian tombs, cut deep into rock, complete with steps leading down to their doorways, amazingly sharp and freshly-carved looking – but totally unsigned and somewhat incongrously located slap-bang next to a concrete factory in the midst of flash resort hotels and villas. 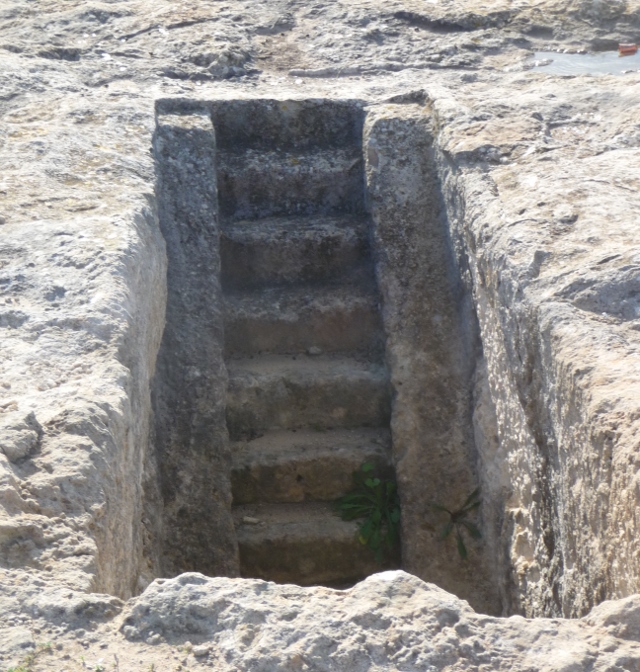 At the tip of the peninsula sits the town of El Haouaria, a bit of a nowhere’s-ville, apart from a long-standing tradition of falconry and quarries carved again by the Carthaginians, right on the sea. When we got there, it was far too windy for any hope of seeing any falcons flying, and the caves had been closed to the public following a landslip – no indication of when, but our guidebook said (without saying why) they were “due to re-open late 2008”! 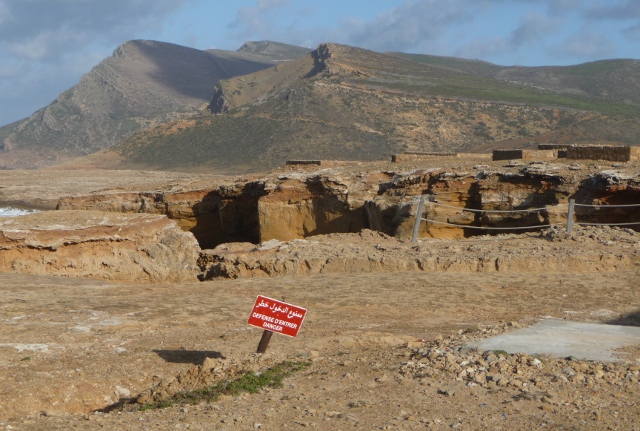 So it was time to find a wild-camp spot, before heading back down the peninsula again. The first few likely locations we checked out were utter non-starters, but we found a secluded spot, right on a beach but hidden by a large bush on a small sandbank, near the town of Dar Allouche. Fantastic, we thought, and settled in just in time for the sun to set. 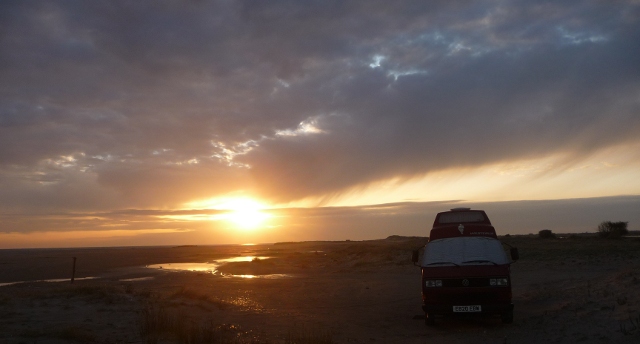 The evening passed quietly, and we hit the sack. We both awoke to the sound of an idling engine and headlights, pointing right at the van from only a couple of metres away. 2.45am. Oh. Gawd. As I peered out of the curtains, and the worst-case scenarios started to flash across our minds, our visitors tooted their horn, flashed their headlights – then flicked their roof beacon on briefly. Police. Hmm. A short conversation in bleary French later our wrists were gently slapped for not informing the local National Guard station of our intentions, and they left us alone for the rest of the night.

Come the morning, we headed off as subtly as we could – not easy in an 8ft tall red van, with a Michelin man on the roof. Especially when you get tangled up in the local school-run taxi-minibus’s morning collections… Still, we seemed not to be unwelcome, going by the huge waves and even blown kisses from the mothers walking back home. We arrived at the excavations of the Carthaginian town of Kerkouane (which grew and stayed wealthy well into the Roman era off the processing of shellfish shells into the purple dye used for Roman imperial robes) shortly before the scheduled opening time – much to the surprise of the on-site guardian, who was just meandering around whilst his little charcoal stove heated his morning coffee. We sat in the van and took our time over our own breakfast, washed down with the juice of a kilo of fresh blood oranges (expensive at 40p’s worth), and headed in, on the promise of paying later once he’d fully opened up. This really is an utterly fantastic site – enough remaining to not only get a real sense of the layout of the town, but to “feel” the individual buildings, too. 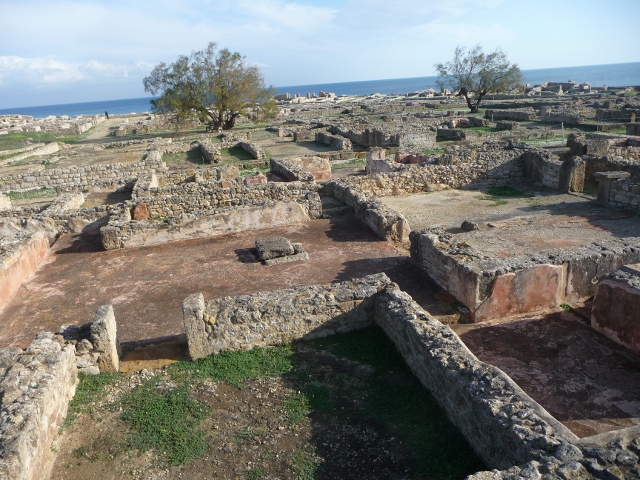 Mosaic flooring, even domestic bathing facilities, were intact and readily accessible. In contrast to the Romans, who built huge communal bathing facilities and abluted in public, the Carthaginians all had bathrooms in their houses, with water being routed away to covered sewers down all the streets. 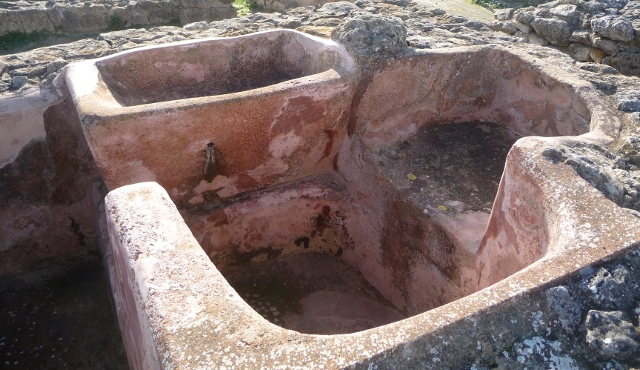 At one point in our wander, the guardian headed in to find us, take our money and give us our tickets – and a quick run-down of some of the areas of the site which were unlabelled.

Once we’d left Kerkouane, Kelibia’s weekly souk was our only remaining stop-off on the road south – entertaining, but utter chaos, people-choked street after street of stalls selling not much but clothing. Whether there was a food section, we don’t know – we just gave up trying after the thick end of an hour.

Finally, we got to Hammamet, just south of Nabeul, and a big international luxury beach resort. Not our kind of place at all. The old fort in the centre of town looked like it might have been interesting, but getting to it looked chaotic, and – to be frank – we couldn’t be bothered. Before hitting our campsite, we stopped off at the famous “Sebastien Villa”. Home in the 1920s to a Romanian millionaire, George Sebastien, it was described by Frank Lloyd Wright as “the most beautiful house” he knew. The starting point of Hammamet’s reputation as a holiday destination for the rich and beautiful international elite before the war, Churchill stayed here after the war, whilst writing his memoirs – and would have certainly used the same wonderful four-lobed sunken bath as the house’s wartime occupant, Rommel. 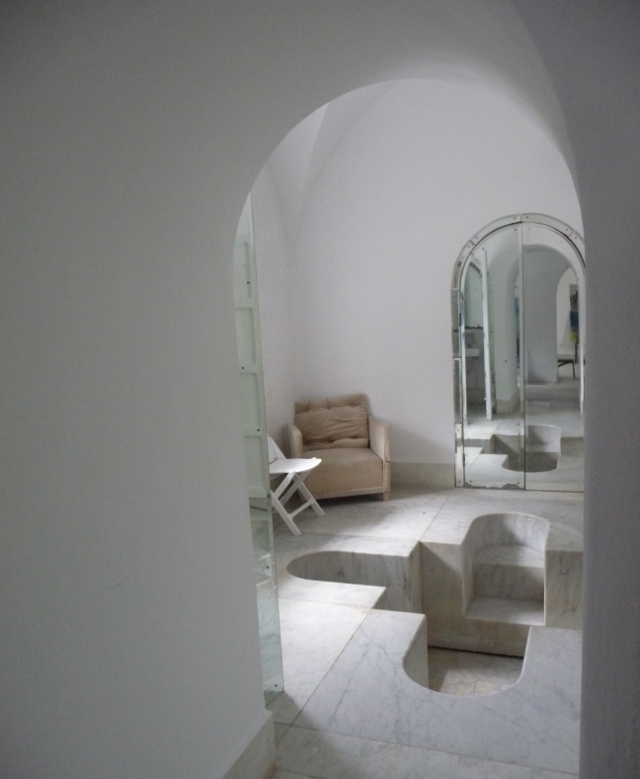 It’s undoubtedly beautiful indeed – especially inside, with a real grace to the clean lines of the rooms. Now, it’s in use as a cultural centre, with our visit co-inciding with a photo exhibition of the Italian premier Bettino Craxi – who was exiled to Tunisia after being indicted for Mafia-related crimes. Strangely, that bit went unmentioned in the umpteen photos of him pressing the flesh with various world leaders. The grounds of the house contain an “ecomuseum”, seemingly consisting of rows of different local trees to show to holiday-makers who won’t actually leave the resort.

The campsite was, again, in the grounds of a gently scruffy inexpensive hotel on the outskirts – this time, acting as an oasis against the bustle of the major road junction immediately outside, with shops and stalls of all kinds spreading along each of the roadsides. More oranges piled high, and the sudden dawning realisation that butcher’s shops here only sell beef or lamb. If you want to get chicken, you need to head to a different shop – which also sells eggs. Keeps the supply chain simple, I s’pose.