Bitola wasn’t really all that great as a destination – there were some good views of the city from the mountains of the national park, and the old bazaar and market area was quite pleasant for a quick wander through, but – somehow – we just wanted to get on the road again as quickly as possible. The weather had started to seriously heat up, and as we headed straight to Skopje the ol’ sweat glands were starting to get the work-out they’d been waiting for. A quick picnic overlooking the vines of Macedonia’s main wine-growing area was our only stop. We’d toyed with the idea of visiting the monastery of Treskavec, above the town of Prilep, but we decided that we’re too wussy. Various sources we’d found describe the walk up to it as “two hours” or considerably more, and not an easy one, either. It’s allegedly possible to stay – but apart from our lack of a backpack big enough to take all we’d need up there (including food), we just didn’t much fancy trekking all that way to get a “Umm, sorry”. Yes, we know. We’re crap.

Skopje, though, is not.

Once we’d found the city’s campsite – in the grounds of a Best Western just off the main Eastern approach motorway (but far, far nicer than it sounds) – we headed in to explore. What an absolute gem of a place. The old city spreads between the sprawling market and the river, on the other side of which is the main centre of the new city. We managed to waste a day just wandering around and around the old town, with no particular aim.

Apart from the streets of old buildings – a little “buffed-up”, but as much for local retail and streetfood as for tourism – the city’s got a couple of real gems in the art galleries. 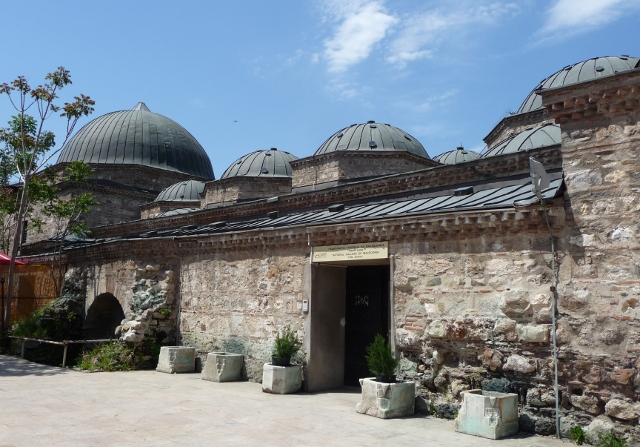 Converted from ancient Ottoman hammams, the two are much more worth visiting to gawp at the buildings than the contents. A mix of huge, echoing halls with beautiful domes and small, intimate side rooms; all with light shafting through tiny skylights and giving a beautiful diffused airiness, restored but in such a way as to allow the feel of crumbly age to come through. 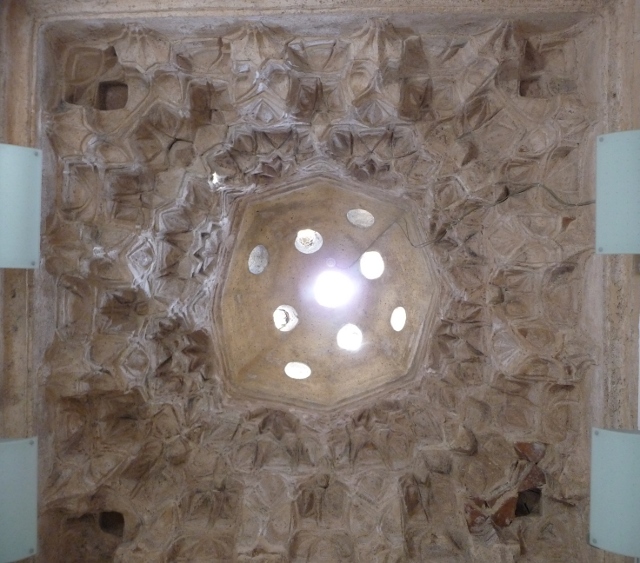 The streets also wind upwards, to the walls of a castle staring out over the river sharing the top of the hill with the grandiose Mosque of Mustafa Paša. Not far from there, the small church of Sveti Spas seems to consist of just a courtyard and (lovely rickety) wooden bell tower – until the guardian unlocks a door in one corner, opening into the large semi-underground church itself. When it was built, the Ottoman authorities had made it illegal for a church to be taller than a mosque, so there was one easy solution available…

The church is completely dominated inside by the vast carved iconostasis, which took three master craftsmen seven years to carve. The pillars and columns are hollow filigree, despite being carved from a single chunk of wood, and the panels underneath the icons themselves were carved with scenes from that saint’s life. Utterly, utterly beautiful.

The small church of Sveti Demetrija, near the old (but much rebuilt and restored) Stone Bridge over the river, was a complete contrast – the frescoes so hidden by soot from the candles that only the gilding was visible. This church was definitely alive, in real use by locals – they’re probably the only ones who could actually find it, given that it’s almost completely surrounded by building work! The whole of the river front on the old town side is being very heavily facelifted, with massive and very grandiose new buildings being erected – apparently, to house various government bodies currently in rented office space around the city. 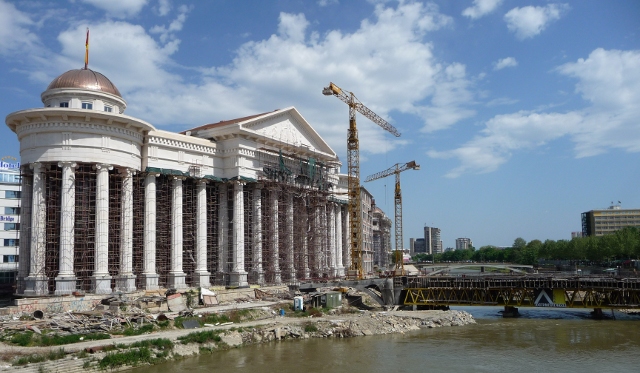 One thing’s for sure, it’ll look good when it’s done. The central focus of the new city (and, let’s be honest, the only bit we really wandered around) is a large square just over the bridge, with a huge column topped by a statue of Alexander the Great and surrounded by very melodramatic fountains separating Alexander’s troops from some hungry looking lions. Oh, yes – and Ellie was amazed to find a branch of Peacock’s – apparently a British low-rent clothing chain… <shrug>

Our taste buds also enjoyed Skopje, you’ll be unsurprised to hear – from nibbling away at delicious Byrek and Kebapci snacks, to sitting in the sun with a bottle of very pleasant white outside a wine bar, listening to John Lee Hooker blues competing with the Muezzin from the nearby Mosque, before the day finished off with a good spread at a street restaurant before getting the bus back to the campsite.

Skopje is a truly lovely city – sure, we saw it at it’s best, on probably the first properly hot Saturday of the year, so everybody was busy just wandering and basking. But it’s worthy of a definite place in our list of favourite cities. The only pity is that it’s probably not worth a city break on it’s own – we felt we’d pretty much “done it” in a day – unless you’re happy to organise yourself some transport and get out of the city, too.

We did just that on the way out (although we didn’t need to do the organising bit, clearly) – as, it appears, did three quarters of Skopje. The hillsides leading up to the lovely church of Sveti Pantelimon were choked with parked cars – not helped by a large number of TV crews. We found out the reason why they were present, as we sat having a bite of lunch in the van before heading back down again… Some VIP, presumably a fairly senior politician, was visiting the building site of what appeared to be new monastery accomodation just over the road from the church. All a bit of an anti-climax, really, but I’m sure he found it a very agreeable way to get some TV time on a sunny Sunday…