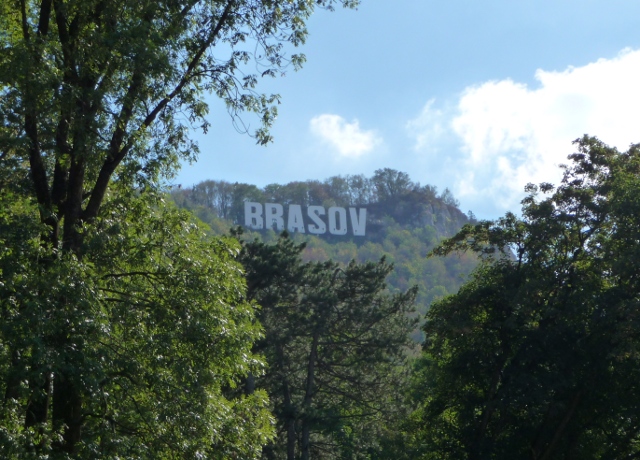 Braşov, founded by the Saxons in medieval times, was a prosperous place. It grew rapidly in the 1960s when the mass industry of the Communist era brought in workers from other regions and it became one of the largest cities in the province. By the late 1980s though economic decline set in, factories closed and the revolution lead to bloodshed in its streets, a park with headstones commemorating those who died lies in the centre of town. Friends who visited Braşov just before this time speak of the poverty, the lack of food in shops, people offering them money for their jeans.

Times have changed, there is still some industry left and in other areas huge out-of-town international brand stores such as Carrefour, Decathlon and H&M fill the gaps where factories once stood. but I’m not sure how many people can really afford to shop there. We are seeing a lot of second hand clothing outlets, many of them advertising clothing from Germany or Denmark, more so than any other of the former Communist countries that we’ve visited.

The centre of town is a bustling lively place – quite Germanic in feel, surrounded by mountains. There is even a tacky Hollywood type sign on the top of one of them, and a nearby ski resort – Poiana Braşov.

We came first to the Black Church, completed in 1477, named so after a fire, started by an occupying Austrian army back in 1689, blackened its facade. Supposed to be the largest Gothic church east of Vienna, it has a simple interior, but is famous for its 17th century Turkish prayer rugs, gifted to the church by returning local merchants. These mainly hang from the walls or are draped over pews, and add a welcome splash of colour.

In one side chapel, there were information boards telling the story of the restoration of these carpets, since the 1960s, and one in particular. They were often cut in half to line pews, and for this one, it was only after hundreds of years that the two halves were reunited, restored and sewn together again. In the meantime, there were candle wax spills, drag marks and other signs of the wear and tear of the ages. As the information boards outlined though it’s these stains and marks that tell you about the history of the item and if they are removed during restoration the object would be deprived of its story and represent merely a decoration, not the used item it had been. Another aspect of the work of restoration is revealed in a quote by one of the dedicated German restorers working in the 1960s and 70s on the collection, Era Nussbächer: “all that we intervene on these several hundred year old rugs must be reversible, for the case that future generations come up with a better method to conserve them.” It’s thanks to the work of this German financed project that we can see the rugs displayed today.

Our next port of call happened to be the Vodafone shop. We had bought a sim card and data package for Romania a few days previously when we were in Targu Jui and on finally arriving somewhere without free wifi had activated it, and it had been set up wrongly for a deal that was a lot less than we’d paid for. We waited with our queue number for about half an hour before we eventually got served. Luckily the assistant spoke English, but there his helpfulness ended. He didn’t trust that we weren’t trying to pull a fast one, we must have been responsible for the set up on line and there wasn’t anything that Vodafone could do to change it. Adrian assured him that it was a Vodafone issue and yes they could rectify it, and that we would insist on getting the package we’d paid for and nothing less. This discussion continued for a little while not getting anywhere fast. After a while, with Adrian’s British tones sparking the interest of other customers and our insistence, the assistant went to speak to his manager. He came back subdued, and immediately began setting up the correct package on our account. An hour later, which had eaten into our day, we left the store, but at least we had been successful in the end. 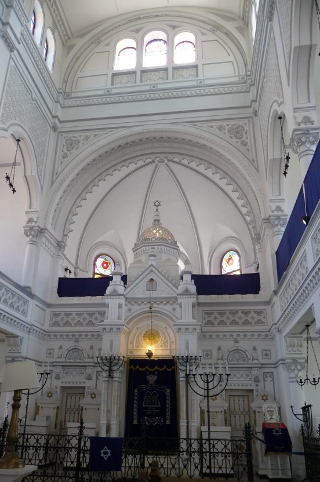 We headed off for more sightseeing and walked past the synagogue, the only one in the town. As we got there a small Dutch tour group were being let in so we tagged along, Adrian donning a skull cap.

The lady in charge apologised for her lack of English, which was of course totally brilliant and in any case far better than our Romanian, before giving us a short lecture on the building, the Jewish community of Braşov and so on. It was interesting, Braşov was long considered a tolerant city and the Jewish population had been steadily growing from 1807 when the first Jews were officially allowed to settle here.

During the 1940s, when Romania came under Nazi domination, the synagogues were desecrated, Jewish property burned or confiscated. Unlike so many other places in Romania though, the Jews of Braşov were not rounded up or deported, and very few lost their lives. After the war, the city became a haven for the remaining Romanian Jews. The population declined again after communism really took hold, with many managing to emigrate to Israel or elsewhere. Now the community only numbers around 300 and the beautiful Moorish style bright white interior of the synagogue is a focal point for the mainly very elderly members.

This wander took us outside the city walls to the Schei quarter. When the city was under Saxon (German-speaking) rule, this was the area that Romanians were forced to live in and they had to pay a toll to enter the city through the Schei gate. Now it’s a quiet area with quite a few imposing administrative buildings, schools and churches. Unfortunately the main church of St Nicholas was closed. We had a delicious lunch at a restaurant – traditional Transylvanian fare. A stuffed schnitzel type thing for Adrian, chicken livers rolled in crispy bacon with a sauce for me, it was one of the best meals with the best service of the trip. We finally got to try ţuică as an aperitif too. This is Romanian brandy, a national drink, which has actually been hard to find.

We leisurely walked back to the centre of town taking in a lot of the landmarks, including a couple of the bastions. These are parts of the city’s fortifications, financed and built by certain guilds, so you have the Butchers’ Bastion, the Blacksmith’s Bastion and in the image below, the best-preserved one, the Weavers’ Bastion.

The fortifications were much needed as the city was attacked by Tartars and Turks, and by Vlad Ţepeş in 1460, when he burned suburbs and impaled quite a few of the residents along the top of the hill to the north of the city. We also managed to find Rope street (Str. Sforii), supposedly the narrowest alley in Romania.

Back at the campsite that evening we were joined by Niki, a Romanian chap with a bottle of wine he said was the home brew of the governor of the National Bank of Romania. It was very good. Niki works for the bank and gave us some tips on what to see on our way further east. The job must pay quite well, as his 4×4 pick-up looked very new, though his aging caravan (like many here) was clearly originally British, with the door on the “wrong” side.

This area of Transylvania is also famous for its Saxon-built fortified churches and we had read up about a couple to the east of town, at Prejmer and Hărman. We visited Prejmer first, which is on UNESCO’s list of World Heritage protected sites. It has a circular outer protective wall reached through a passageway with a portcullis half-way along it for lowering at times of trouble.

Inside there are store rooms and school rooms with external stairs up to them. In the centre is a 13th century church, the fortifications came later. Church aside, the structure reminded us strongly of the Ksour, the fortified grain stores we’d seen and loved in Tunisia. 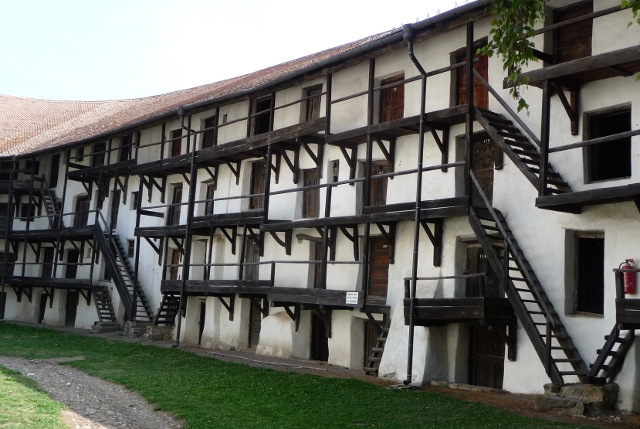 The interior of the church was simple and beautiful with merchants’ rugs like the Black Church in Braşov. We also found our way into the passageway inside the roof  of the fortifying wall and walked right round – a welcome escape from the noisy Polish tour guide leader speaking into a PA system to his group even in the church. 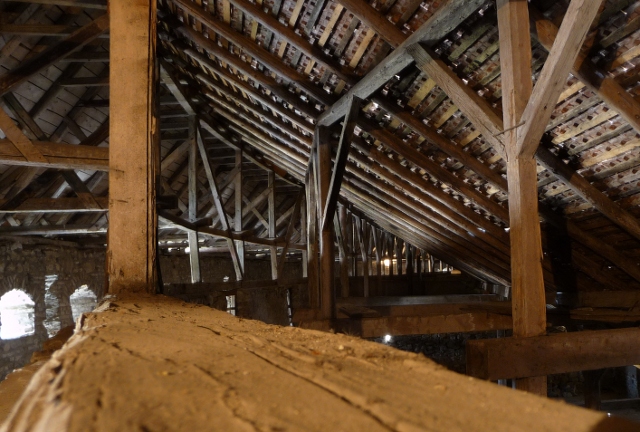 Hărman felt smaller and quieter than Prejmer, and the ladies taking the ticket money, between cigarettes, spoke in German. The fortifications here were higher though and had originally consisted of three concentric walls, the outer one has gone, and seven towers.

The church felt homely, very old wooden pews, some of them just benches, personalised with ages-old graffiti, and more current cushions and blankets, as well as the merchant rugs. Again we could explore some of the rooms and lofts of the fortification. There was a mocked up school room here too, and various displays of implements, furnishings and costumes.

A picnic in the van later, we were then fortified for our onward drive not further east this time, but westwards. We’ll be zigzagging Transylvania a few times so look out for the next instalment – Vlad will crop up again before long.

Following the road...
View all posts by EllieGee →
This entry was posted in Art & Culture stuff, By Country - Romania, Travel stuff. Bookmark the permalink.