We were sad to bid farewell to our friends in Ljubljana, but it was time to hit the road once again. We headed south-west and then took a road north up the Vipava valley, not so very far from the Italian border, in the heart of the Kras or Karst region. It’s a limestone plateau with  Mediterranean vegetation and typfied by caves and sinkholes, more arid than the lush alpine scenery we had enjoyed on our day trips from Ljubljana. We opted not to visit the famous caves of Postojna and Škocjan and instead headed for less touristy areas. 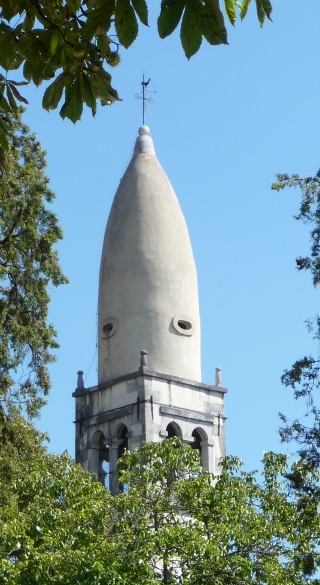 As we looked for the turning to the village of Štanjel that Peter had said was worth visiting, we spied two heavily laden young backpackers. As we passed they stuck their thumbs out. We pulled up ahead of them not expecting to be able to offer them a lift because we would soon be leaving the main road. It turned out that they were French and trying to get to Štanjel too. They’d failed to find the hiking route and very gratefully jumped into the van, saving themselves a long tarmac walk in the heat of the day.

Štanjel more than lived up to Peter’s promise. It was fortified and on a hill top with narrow streets and alleys climbing up in different directions from under an archway in the walls, the quirky spire of the church presiding over the sun-baked stones.

There was very little there apart from some lovely houses, a lot of them having been recently renovated or in need of urgent attention, and a really good tourist office.  The image below shows a typical cottage with stone gutter and its well outside. The handful of other tourists we came across were also all French, travelling in different ways.

We explored the whole village which was siesta-ing gently, and bought a jar of honey for sale from shelves outside one of the houses, leaving money in the honesty jar.

As we were about to leave, we found ourselves in the courtyard of the simple castle building, having spotted some cool t-shirts for sale outside. As we went inside to ask about different sizes, we found that it was an art gallery displaying the work of Lojze Spacal (1907-2000), whose family had originated in the area. We paid the small entry fee and went in to look at his wonderful graphic prints, mosaics, stone carvings and paintings. The t-shirts featured one of his graphic prints, his other work was related to the Karst landscape, or was a nod to the politics of former times. He was born in Trieste a short distance away in Italy and had been imprisoned for anti-fascist views in his early twenties, which was where he made his first woodcuts. The building is a work of art too, dating from the 16th century but built on an earlier medieval site, and we looked through the tall windows over the surrounding countryside.

The lady in the tourist office had suggested a route for us through more sleepy villages. With an accidental visit to Italy when we missed a turning, we sped onwards around the Vipava valley region. We were aiming for a campsite at the Saksida winery  near the river, not far from Nova Gorica. It took some finding, but when we did, it was a tiny camping area set amongst vineyards. Just one other van was parked up – Claire and Steve on holiday from teaching jobs in the UK. Good to chat to fellow Brits again.

The camping fees included a tasting of three wines (it stated on the flyer). In the meantime a German couple had turned up, and one of the owners came to say that her father, Jožko Saksida, would be holding the tasting at 8.30pm. So the six of us were ushered into a cool tasting room in the cellars and stood around a barrel table while a generous measure of each wine was poured into our glasses. It was very good wine, and before too long the expected three tastings had become nine tastings, including their sparkling wine and the 55-euros-a-bottle brandy. It was a great evening – a lot of delicious flavours and aromas, new friends and talk that continued into the rest of the night.

Mr Saksida had told us of an award-winning pizzeria in the vicinity that apparently had the third best pizzas in the world. At lunchtime the following day, we convoyed to Branik with Claire and Steve and had an early lunch of the promised wonderful pizza at the Ošterija restaurant.

Our bellies full of pizza we headed north along the Italian border into the Brda region – visiting Dobrovo, a small town at its heart. Part of the road there had been thoroughly fenced in with photography forbidden signs as it passed through Italian territory. Also a wine region, we couldn’t ignore another opportunity to taste some more local wines, so we went to the cellar vinoteca beneath the castle for another wine-tasting interlude.

The girl in the tourist office there asked if we’d visited the village of Šmartno on our way. We’d passed through but not stopped. She looked a bit put out, so we promised to stop there on our way back to the main road northwards. It was worth it. A charming fortified village with many recently renovated buildings, each with a photo of former times on one of its walls. A wander round showed that there were plenty more waiting their turn to be worked on.

Our drive northwards along the Italian border took us back into the Soča river valley we’d visited with Peter and Alenka a few days before.

The weather turned as we drove on, the sky turned black and rain started falling steadily, and the landscape became alpine.

We were spoiled for choice for campsites in this more touristy area and settled on one that in spite of early promise turned out to be less inspiring than we’d hoped. No matter, we were stuck in the van for the rest of the evening anyway.

The next morning dawned fine though as we set off to see just one of the many World War One sites that are scattered throughout this border region. I had to read up – being familiar with the World War One history relating to the battlefields of France and Belgium, what was the story here? In a nutshell, Slovenia was then part of the Austro-Hungarian Empire which, together with the German Empire and Italy formed the Triple Alliance and was at war with Britain, France and Russia. Italy didn’t enter the war straightaway though, and when it did, it switched sides to fight against its former allies. The Isonzo Front stretched along the mountainous border region above the Soča valley and fighting here went on from May 1915 to October 1917. Around 300,000 soldiers lost their lives in the area. You can see cemeteries, memorials, trenches and other evidence of the war, and a Walk of Peace trail commemorates these events.

We visited Mount Kolovrat where well-preserved tunnels and trenches wind their way into and over the mountain ridge, with lookouts and command posts dotted around. 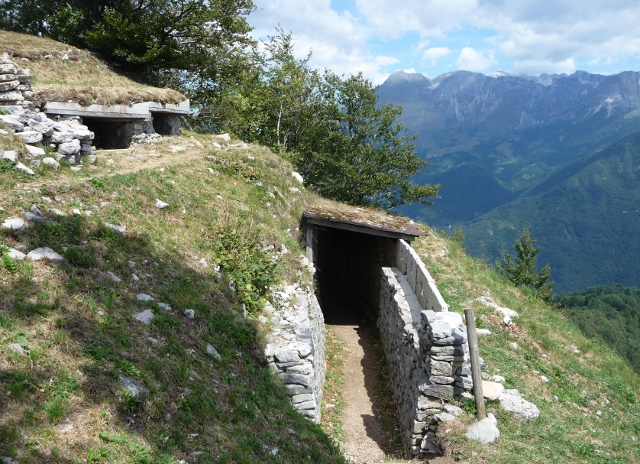 There were tremendous views from this vantage point across the Soča valley into Slovenia on one side and out over Italy towards the Adriatic on the other, but the harshness of conditions for those caught up in the fighting is beyond imagining.

The current border is of course open as Italy and Slovenia are both members of the EU signed up to the Schengen agreement. This border runs pretty much up the middle of the mountain ridge and was decided in 1947, according to the marker stones. Back in October 1917 after the final battle, the Italian border had been pushed back to the Piave River on the Italian side. We wandered in and out of both countries talking about the different borders we have crossed, how many times the lines have been redrawn, and how many people have lost their lives as a result.

Heading westwards we found more lush river valleys with sparklingly clear waters, verdant meadows and villages. Every ridge or mountain top with its bulging church spires, made of copper. Having seen a bit more of the west of the country, we were now en route for the eastern town of Maribor. On the way there, totally unplanned, we saw a brown tourist sign showing the old town of Škofja Loka. We passed through the new town first and it didn’t grab us, but a little further on spires and interesting looking roofs appeared, and we turned off down a narrow lane and found a parking spot. It was a real gem of a town, painted buildings, churches, alleyways, a walk up to the castle buildings housing the museum through a landscaped park. A really lovely place to linger on our journey across country.

We were looking to overnight at a free eco-camp (with voluntary donations gratefully received), we’d noticed when on our tour with our friends. It was about halfway to Maribor, and we are keen to support such ventures when possible. The conditions of camping in this small patch of woodland included not telling major guidebooks, so I won’t name the site here just in case (please contact us for details if you are planning a trip to Slovenia and want to know more). The basic facilities included a set of recycling bins with their own witty messages – the paper bin could include Angela Merkel’s book and the plastics bin could include plastic bags – but not if they were from Lidl.

Following the road...
View all posts by EllieGee →
This entry was posted in Art & Culture stuff, By Country - Slovenia, Food stuff, Travel stuff. Bookmark the permalink.