It took around two and a half hours to drive to Mostar from Visoko, with Nathan and Anna following us in Ginny. All the while we couldn’t help but see the many hills of Bosnia that look like pyramids.

Mostar is a large sprawling town in the south-west of the country that is Hercegovina. As we drove into town in the golden evening light, we decided to park up and have our first look at the famous bridge, before driving further to find a campsite.

The centre of the medieval old town of Mostar is set high on both sides of the Neretva river, linked by its Stari Most – old bridge, from which its name ‘keeper of the bridge’ originates – a UNESCO World Heritage Site. On 11 November 1993, the 16th century bridge was blown up by Croat forces, dividing the town along ethnic lines. The new bridge was completed in 2004 as an exact replica of the old one, using the same methods and even some of the remains of the old bridge pulled from the river. It is a graceful arch but its cobbles are slippery and difficult to walk on. This doesn’t detract from its beauty, amid its backdrop of medieval buildings and Ottoman style streets and houses. We walked around a while to take some photos, before having a lengthy recommendation of a campsite from the guy in the tourist office. He threw in at the end that the campsite belonged to his brother. Not unbiased then.

We drove on to the small town of Blagaj around 12 kilometres away, which boasts at least five campsites. The recommended one didn’t look particularly appealing so we went with our original choice and soon Ginny and our red van were nestled side-by-side and Nathan was embarking on preparing a huge bean curry to a recipe learned when they were in India. It was delicious and was washed down with some beers, and we talked into the night as ever. Like the campsite in Sarajevo, there was an intruder incident. We heard a snuffling down beside the van and shined a torch to reveal… a hedgehog . (It was Hedgehogovina after all.) 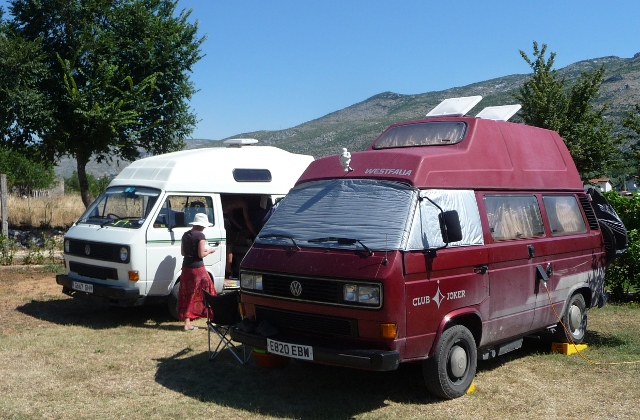 The next day, Anna and Nathan only had a few hours to spend in Mostar before their border insurance ran out, while we had decided to stay on another night, so we hitched a ride into town in Ginny and planned to get the bus back.

We meandered the streets of Mostar’s old town, crossing and recrossing the bridge, hoping to see someone diving off it. There is a tradition of handsome young men diving into the river for money collected from the crowd. Evidently there wasn’t enough forthcoming because the diver who looked poised to descend walked away after a while.  Crossing over to the East side of town, away from the immediate area surrounding the bridge, past the tourist gift shops selling tacky souvenirs, which here in Mostar include items made from bullets and shell cases.

Past the cafés and the pretty restored mosques, you saw the buildings that hadn’t been lovingly rebuilt… yet. Once grand they’ve been forlornly abandoned husks for nearly 20 years.

While looking for somewhere lovely to have lunch together we came across what looks like a small copy of Stari Most. The Crooked Bridge (Kriva Ćuprija) is thought to have been a practice version of the larger one. This one is now new too. The old one, weakened by war damage, was washed away by floods in 2001. The new one has been built with money from Luxembourg. 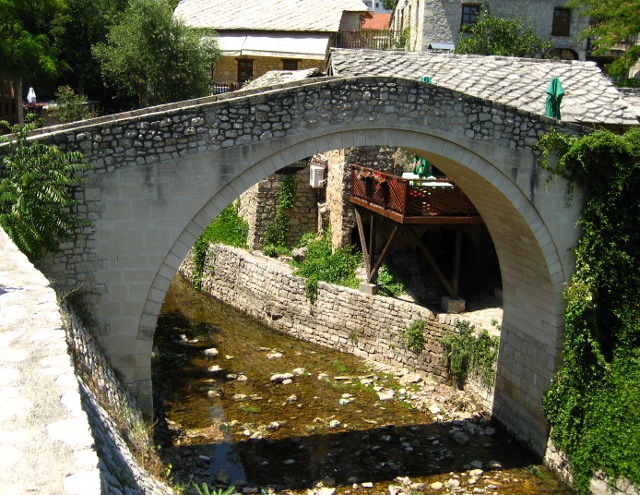 We found  a konoba with a terrace overlooking one of the Neretva tributaries and had a slap up farewell lunch. We will miss Anna and Nathan, but won’t forget them as they have very kindly lent us their spare camera, seeing our troubles with ours.

After parting with our friends, we visited one of the Ottoman museum houses by the river. By now these are very familiar to us, but we always take the chance to visit one when we can, as we love the airy interiors, the wooden carved doors and balconies.  We also peeked into one of the Muslim cemeteries, with their tall narrow white stones, so many from 1992 and 1993.

We walked into a bookshop which had a photo exhibition, as we looked at the books and at the stark images of the town’s destruction on the walls, we were drawn towards the screen playing a continuous loop of the immediate shelling that lead to the bridge’s destruction. After earlier damage, the fragile bridge had been covered in scaffolding and old tyres in a vain attempt to protect it – it provided a lifeline to the Muslim community on the east side. The forces were determined to divide the city though and we all watched in horror and sadness, tears in our eyes as the film wound on to its conclusion. The bridge was hit again and again, finally falling in a cloud of dust into the river beneath.

Earlier we had come across a former hammam building housing a display of information about the city’s history and reconstruction.  Evocative words helped to explain why people cry over the bridge falling, but not over a massacre. Their meaning was that we accept that people will die, but the bridge was made to outlast us,, “a monument to civilisation”. “A dead man is one of us, the bridge is all of us forever”.

We’d come closer to the war in Mostar than we had elsewhere in Bosnia, and one can only pray that the hope and reconciliation symbolic in the new bridge will bring about just that and that it will now stand forever.

In thoughtful mood, we headed for the bus stop. We had learned from a very efficient young lady in another tourist office that the bus went at 5.15, and had killed time in a bar. The driver of another bus that stopped about 10 minutes after this told us that the timetable had changed and our bus was at 6.30. We were by this time rather hot and tired, and became cranky at this news.

We didn’t have much choice though but to wait, and after a while headed back towards Stari Most. There was a diver poised there high above the river. This time he did dive.

On returning to a bus stop further along the road, we asked the people waiting if this was the right stop. They didn’t speak much English, but one young guy said “Men jag talar Svenska” (but I speak Swedish), another Bosnian Swede with a strong provincial accent. He was surprised and pleased when I replied in Swedish. It would have been interesting to talk more, but just then our bus came and he was waiting for another.

Following the road...
View all posts by EllieGee →
This entry was posted in Art & Culture stuff, By Country - Bosnia, Travel stuff. Bookmark the permalink.