Into Bosnia and Hercegovina

It seems like for the last couple of weeks we have been on holiday from our journey, relaxing with friends and enjoying the coast and rivers of Croatia. We are going to embark upon more of this shortly, so in order to ensure we are fresh-eyed for the rest of our Croatian leg, we decided to take a foray across the border into neighbouring Bosnia and Hercegovina.

We retraced our route back inland over the mountains towards the border-crossing near Bihać in north-west Bosnia. When travelling through northern France it is impossible to go far without stumbling across reminders of the two world wars that were fought on its green fields, so it has been on occasion as we’ve travelled in Croatia, although through most of the coastal areas obvious signs of conflict have largely disappeared and it’s easy to forget a war took place here. We’ve talked to friends about their experiences of the war, and seen damaged buildings.

It is, of course, impossible to visit Bosnia without thinking about the war. We have read up on the region’s wars following the break-up of Yugoslavia. Trying in vain to make any sense of them, trying to get our heads around the complexity of it all. The war ended in December 1995, that long ago now, but I remember vividly the TV and radio reports, feeling powerless to help – the very worst horrors of war were occurring again on European soil. The familiar place names a role call of bloodshed and destruction. Sarajevo, Srebrenice, Mostar, Banja Luka… No lessons learned then. Tears of anguish for the victims as I heard that the UN seemed unable to help innocent civilians. Massacres, concentration camps, rape camps, and evil new phrases like ‘ethnic cleansing’ entering the language of fear.

So now, all these years later, perhaps there will be no more evidence of war than on the coast of Croatia. The Bridge of Mostar has been rebuilt, perhaps everything will be as good as new. In Croatia we kept on hearing the phrase ‘forgiving but not forgetting’. Would that be on people’s lips in Bosnia? As the border with Bosnia grew closer we saw more obvious signs – nearly 17 years after it ended there are still plenty of building facades pockmarked with bullet holes, and half-abandoned villages.

Bosnia had a checkered history well before the early 1990s, not least being part of the Ottoman and Austro-Hungarian Empires, and it’s these influrences and the parallels with other countries in this region that make it so appealing for us to visit. In 1995, at the end of the war, Bosnia and Hercegovina was divided into two autonomous regions – the Federation of Bosnia and Hercegovina, and Republika Srpska. There is a third area, Brčko, governed locally. The country’s presidency consists of a member of each of the three main ethnic groups with the chair changing every eight months to ensure equality. The groups are Bosnian Serbs, Bosnian Croats, and Bosniaks – the Bosnian Muslim population, which is the majority. For simplicity, though, we will be mostly referring to people as Bosnian, whatever their background.

We crossed the border, getting insurance for a much lower price than expected after only a slight haggle with the guy in the pin-striped jeans and orange surfer dude t-shirt, a few stray dogs milled around and minarets were visible in the distance. (For more on the border crossing and car insurance issues, see Adrian’s Ongoing Balkan border post.)

The weather had begun to change with the scenery as we had neared the border. The green forested hills surrounding gentle rolling farmland continued with purple-grey clouds gathering and the first flashes of lightning. Luckily the weather mostly stayed in the distance. We had some kilometres to cover, after a quick visit to the Bihać tourist information office. One frustration on entering new countries is that it is very hard to get information covering more than just the local area you have arrived in. No matter, we were aiming for Jajce towards the middle of the country, where we knew there was a campsite and an interesting area to visit. Jajce was once home to the Bosnian kings before Ottoman rule, the last of whom died in 1463.

We saw many more damaged buildings on our way, crossing Republika Srpska, with its Serbian flags and road signs in Cyrillic.

The campsite was at Plivsko Jezero, a lake which flows off into the river Pliva down a narrow valley towards the town, with waterfalls, islands and the by now very familiar forested hills behind. As we came off the main road and followed the signs to the site, we came across the mlinici – mini wooden watermills sitting above a row of waterfalls. The parkland around them was filled with picnicing families and friends.

The campsite was quite good and we found a shady spot as the weather had now improved and the forecast was favourable.

After dinner we got our bikes off to explore the lake and riverside more thoroughly. A hill in the distance appeared to be on fire, but no attention was being paid to it, by anyone. It was still quite busy with cars everywhere by the lake. So many of them had Swedish registration plates, which being half-Swedish myself caught my eye. There were no Swedes at the campsite though. Could they all be Bosnian diaspora?

Next morning the weather was definitely a bit more settled but hazy rather than sunny – perfect for the cycle down the valley into town. Before we set off, we got chatting to our neighbours in the campsite. Wolfgang and Claudia were there from Germany in a white T25 pop-up, with their two little ones. One of them was the reason for their trip – two months’ paternity leave is the perfect excuse to travel around the Balkans!

We followed the Pliva that, as it passes through the town, plunges down into the Vrbas river, the waterfall creating a dramatic setting for the town topped by the citadel, which had repelled the Ottomans for years back in the fifteenth century. The high street of the town was rather run down with war damage much in evidence. There are still many interesting sights though and the citadel, ruined centuries ago, has been restored, and many mosques, public buildings and homes have been rebuilt. Much remains to be done though. I passed a ruin of a formerly beautiful house below the citadel. It had trees growing out of it. Then I noticed fresh washing hanging outside. The back of the building was being lived in still.

Lunch was čevapi from a back street diner. We have consumed variations of these delicious spicy mince ‘fingers’ throughout the Balkans, but we’d heard they were specially good in Bosnia. They were. In Bosnia they come served in a big bread roll – sometimes fried with a doughy almost pancakey texture, and a heap of chopped onion on the side. Washed down with the tasty Sarajevsko beer … these became a staple during our short Bosnian stay. 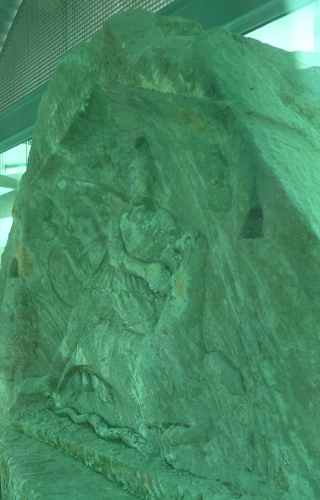 We visited the catacombs, built by Hrvoje Vukčić, the founder of Jajce, in around 1410 for his family. It was a welcome cool on a clammy day.

The Roman temple of Mithras was a tiny gem of a sight hidden away down a newly reburbished residential street. Money had evidently been received to create a snazzy glass shelter around the remaining stones and relief. It wasn’t quite ready yet, but we were able to peer through the gate and take pictures.

The Swedish connection
As we wandered back down into town, we saw yet another car with an ‘S’ on it parked beside a house with the family out in the garden. We said hello in Bosnian and in Swedish and asked whether they were from Sweden. Their daughter explained to us that her father was Bosnian and he left for Sweden during the war, like half the town. They spend their summers in Bosnia, and divide their time between the two countries.

Sweden accepted some 50,000 Bosnian refugees in the early 90s, mostly Bosniaks. I was living in Sweden in 1993/94, when the war was raging, and remember some Bosnians visiting the Folk High School I was studying at. I had Kurdish and Iranian friends there who had sought asylum and I know from hearing of their experiences that although Sweden is quite possibly one of the best countries to end up in, it was by no means an easy a ride for them. After this we kept hearing strangely accented Swedish tones as we travelled through the country. Who would have guessed that Swedish could be valuable as a second language in Bosnia? Another ethnic dimension.

On our bike ride we had noticed a Konoba (inn/restaurant) below the road by the river. A perfect spot for a beer on the way home, and also a plan for a dinner there the next night. We had decided to spend an extra night in Jajce and visit Travnik, a town not far away.

The drive there was down the stunning Vrbas valley, beside lush farmlands, but we spotted few crops or livestock. The hay was being gathered up though, sometimes with baling machines, sometimes with a pitchfork. We saw the odd horse and cart, but it was mainly tractors in use.

Travnik has many towers, lots of mosques, including a pretty painted mosque similar to the one we’d seen in Macedonia, therefore many minarets. 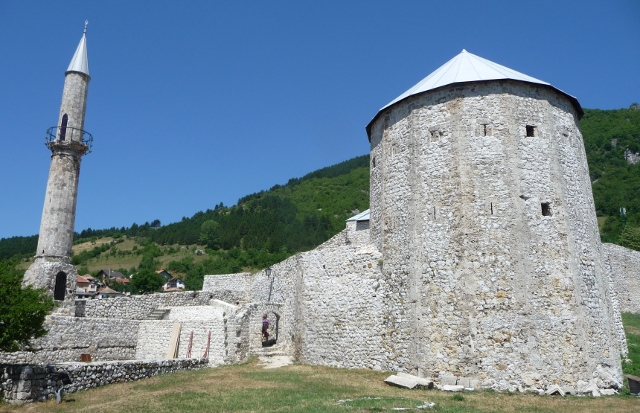 From our vantage point we looked down and spotted an interesting-looking place with restaurants and made our way down to have a look. This was Plava Voda – a stream gushing between outdoor and indoor restaurants, with fish ponds off to the side. There were tourist tat stalls and čevapi were being grilled. Yes, we succumbed again.

On the way back, we tried to find a shortcut through back roads to Jajce. Eventually we did, only it turned out to take us far longer than by the main road. Sometimes the road turned to piste as it went through the heart of the forest. There we came across the red warning signs for a lethal danger still very much a reality in Bosnia. Mines. The war may be over, but mines go on to claim victims long after. A significant proportion of these casualties were those bravely working to clear them.

On a happier note we saw several weddings in full swing. One tradition is that there is a convoy of the married couple and their guests, hooting madly and often waving flags from their decorated vehicles. Here there were both Croat weddings – the Croatian flag was waved – and Bosniak weddings, were Bosnian and Islamic flags were on show. It being Saturday, there was a lot of hooting until way into the evening.

We enjoyed our promised fish dinner at the nearby konoba, sitting by the water until long after dark. We experimented taking night pictures with our still-misbehaving camera, and went to take pictures of the lit up mlinici on the way back. 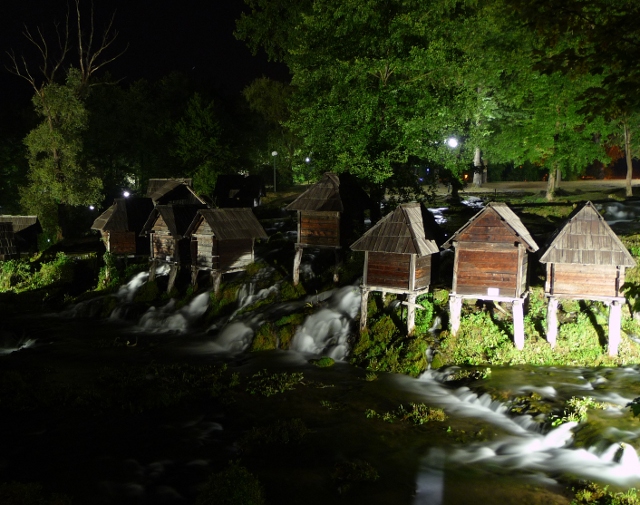 The distant forest fire continued to burn as we headed towards Sarajevo the next morning.

Following the road...
View all posts by EllieGee →
This entry was posted in By Country - Bosnia, Food stuff, Personal stuff, Travel stuff. Bookmark the permalink.

1 Response to Into Bosnia and Hercegovina