We reached the area near El Louza towards the end of the afternoon and the last rays of the sun were just catching the fishing boats moored on the shore at the edge of the village. We could see our destination – the hotel and camping El Kahena just up the road. As we were taking photos, a man waved heartily from a passing car. It was Ismail, who together with his wife Sonia gave us one of the warmest welcomes we’ve received in Tunisia, and that’s going some.

The hotel is fairly new, and beautifully appointed, and you can camp in the car park but the camping area isn’t fully fledged as yet. Ismail showed us round the hotel and it didn’t take much persuasion together with his reasonable prices for us to opt for a room with ensuite and superb view. We only intended to spend a night or two here but it was so comfortable, pleasant and relaxing that we ended up staying four nights. The washing machine was also a huge benefit for us. The weather was still very mixed and on our first morning it was bright and sunny. After doing all our laundry and hanging it all out, it poured with rain. This nearly always happens when I do the laundry, but we do need to attempt to have clean clothes.

After struggling with wet washing, the day was spent lazily. Our second day was also very mixed weather wise, Ismail invited us to take coffee with him in the nearest larger town, Jebiniana. In general, a lot of the cafés one sees around Tunisia tend to be quite barely decorated, smoky and crowded with men talking over strong coffee or sweet mint tea. Not attractive places for women to enter or linger. This one was no exception, but being with a Tunisian I was able to get over the hurdle of sitting and talking with Ismail and his friends (and Adrian too of course), although I did feel a bit conspicuous.

After our coffee, we accompanied Ismail on his errands around town, and we stopped off to pay a visit to a carpet weaver. This lady proudly showed off her traditional weaving and her family of several generations gathered around, the great grandmother in traditional dress. Again it was a heartfelt warm welcome.

Just down the road from here was the local marabout of holy man Sidi Abou Ishaq al-gebenyani, the son of the man who built the city walls at Sfax. The door was locked, but Ismail rounded up the keys from Fatima, a woman living nearby, and we also met Sara, whose ambition is to be a professor of English. She was so enthusiastic to meet us and to practice the language. They invited us for lunch, but it was a bit early and Ismail had other plans for us.

We headed back to El Louza and called in at Ismail’s family’s shop where we met his mother and sister who were also pleased to see us. 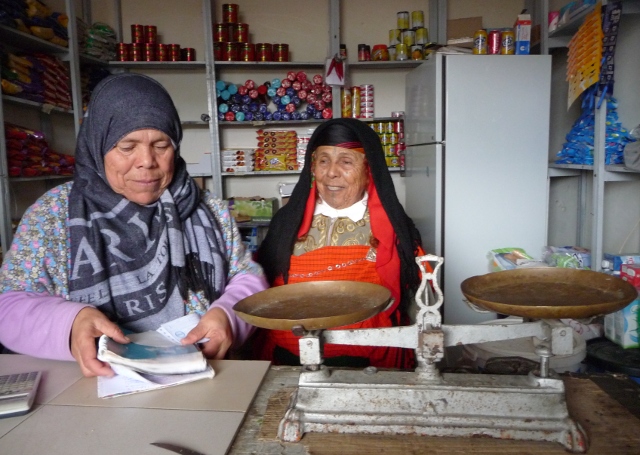 Ismail then showed us the fishing port a few kilometres away and the sun shone on the brightly blue painted boats, and the fishermen mending nets and making repairs. There were piles of clay pots at the edge of the quayside. Octopus is one of the biggest catches round here, and the pots are left at the bottom of the sea for the creatures to crawl into overnight. The fishermen then haul them up the next day.

Later we went to local Roman ruins. Acholla was a settlement by the sea, and its remains are literally a roughly fenced off area in the middle of a ploughed field. We would never have stumbled across it on our own.

There are remains of houses, baths, a cistern or two and glimpses of what were once stunning mosaics. Apparently other mosaics have been taken to the Bardo Museum, or have disappeared. No one’s quite sure. There are shards of pottery, mosaic tiles, and fragments of frescoes everywhere, including being ploughed into the field around.

As Hugh mentioned in his recent comment, Tunisia has so much ancient heritage, it can’t keep tabs on it all. Minor sites, like this one, which haven’t been properly excavated let alone protected run the risk of further decay and damage. And who knows what lies under the soil?

We had tea at a café in the village and then looked forward to our dinner … couscous with octopus of course.

Our third day was forecast for dry sunny weather all day … and it proved to be right for once. We headed south to the city of Sfax on the coast, which is an affluent place, less heavily touristy than some of the towns we’ve visited further north. We admired the city walls, surrounded by palms and explored the souks, with their ancient mosques almost hidden away until you look up.

These were more workaday than touristy for once and as ever we loved meandering along the narrow lanes and alleys. We caught glimpses of the everyday here, the sheep being skinned in the street, children milling around during their long midday break (from ten until two), craftsmen hard at work, from tailors to knifemakers.

We visited the Café Dirwan, a beautiful atmospheric place, frequented by both women and men. We loved the Dar Jellouli museum of traditional crafts housed in a 17th century town house, galleried around a central courtyard, with original carved screens, tiling and all the details we’ve come to love.

We also visited the Museum of Architecture, housed in the Kasbah by the city walls with its interesting examples of local architectural details.

For lunch we dove into a small local eatery packed with souk shoppers with an Arabic only menu. We didn’t know what to have or what there was, but after queueing to wash our hands at the central sink with everyone else, we were seated and some suggestions were made to which we agreed. Along came some of the most delicious soup ever. We are fast learning that Tunisian soups are really some of the best we’ve ever tasted. They’re hot, spicy and filling, and very yummy. Then some salads and bread, and then Kamounia. A cumin lamb stew with a thick sauce, again really quite hot but so delicious. You can eat so well here for so little, especially at the little hole in the wall places.

Back at El Kahena, we took an evening stroll with Ismail along the beach as the sun was setting and he shared his concerns for the future for those involved in the tourism industry. Last year’s revolution has kept foreigners away and discouraged further investment, and the economic situation across must of Europe also affects visitor numbers.

We were sad to say goodbye to Ismail and Sonia as we’d had a wonderful few days at El Kahena, but the road was calling us to move onwards again. We felt we’d gained a deeper view into Tunisian everday life off the beaten track and we’ll treasure the memories of the people we’ve met.

Following the road...
View all posts by EllieGee →
This entry was posted in Art & Culture stuff, By Country - Tunisia, Food stuff. Bookmark the permalink.