We followed the campsite owner on his bike slowly for around 5km, and arrived safely at Degli Ulivi campsite in Sferracavallo. It’s a small site compared to some we’ve been on, but cosy and very friendly as was the town. We had everything we needed just on the doorstep too in lively Sferracavallo, a satellite town of Palermo set beneath spectacular cliffs with a small harbour.

Regular fruit and veg stalls and itinerant Ape sellers (not selling animals but driving around in the picturesque small 3-wheeler moped vans and pickups called Apes and pronounced ‘Arpay’, which means bee as opposed to all the buzzing Vespas, or wasps). Being old quirky vehicles they are very dear to our heart! Announcing their wares, the vendors sound almost like the islamic muezzin call to prayer. A large Wednesday street market and the fresh pasta shop were the icing on the cake, and talking of which there was a lovely pasticceria too.

The only downside was that the site had no internet access at all, which precluded us from treating it as a longer stay address to have some of the parts we now need urgently for the van sent to us… Somehow we forgot to leave after our planned three days or so and ended up staying for ten. Leaving with fond memories having met old friends again and made new, but still not having the parts we needed for the van.

The city was two buses away, both frequent lines, but their various quirks and the usual lack of information lead to some interesting trips home, and almost getting completely stranded in some outer lying suburb on one occasion. From our initial bus journey in, though, we just loved Palermo. Our first big city for a while, it has a wealth of grand buildings with influences from Norman times to the fascist era, via Baroque and a visible Arab heritage in some churches which started life as mosques centuries ago. On the first day we had ‘done’ about five churches by lunchtime. Piazza Bellini and its fountain of statues with magnificent Santa Caterina as backdrop started us off, and we covered the splendid duomo (much more impressive outside than in) with the Norman Palazzo Reale and its Palatine Chapel in the afternoon.

The Palace is also the Sicilian parliament chambers and is only open on certain days. For once our luck was in and we got to see the plush rooms, and the beautifully ornate mosaiced Sala Ruggiero (King Roger’s hall). The Byzantine influenced Palatine Chapel on the floor below was also astounding with its gold mosaics, and it was hard to tear ourselves away. 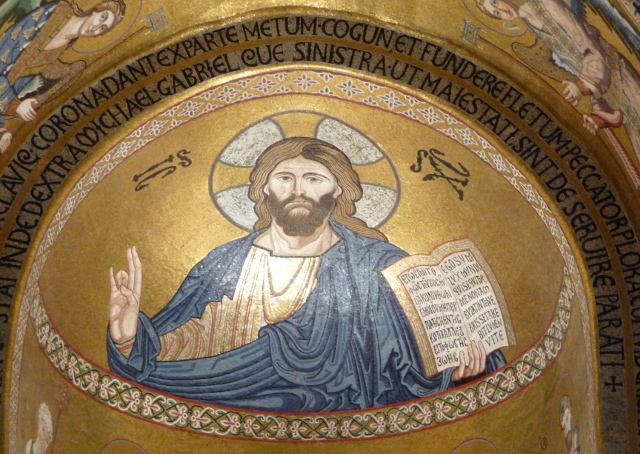 We spent some of our ten days just relaxing though and doing next to nothing – something that has always been hard for me but is becoming very easy these days. We strolled around Sferracavallo and caught up with Jenny and Neil again when they arrived a couple of days later. The most international site we’ve been on to date, with Ric from Scotland who has been on the road for a year. We also got to know Claudia, originally from Mexico. Claudia is following her dream to grow as a musician and artist, living in a turquoise tent and funding her travels with busking on the streets of the city, spending time meeting with other artists and students. The two of us spent much of a day sketching together around the bay, and talking about life, love and dreams.

German Uli and his Czech wife, Martina, have been travelling for two years and will be on the road for a few more yet. Jacques and Simone from Quebec turned up in their Canadian registered van, which had arrived in Europe at Liverpoool. We all spent a very social night together with Claudia playing some South American songs, and Simone joining in with some French Canadian.

After our wander around the Wednesday market, we had an energetic bike ride with Jenny and Neil to Mondello, a picturesque seaside resort town a few kilometres away, the other side of the mountain. We had a seafood lunch along the front there before the dreaded uphill ride home. Luckily it was nowhere near as bad as we’d feared, the threatening sky didn’t open, and the traffic was less busy than the ride there too.

Back into Palermo and we visited a great non-tourist restaurant right in the centre of town recommended by Claudia. Cheap and cheerful and full of Palermo’s working people on lunch hour, it’s refreshing to know that you can still find such authenticity and value for money in the centre of a major European city. Once we’d figured out that we had to collect a docket from a booth, pay at the bar and go back to the booth to choose the actual dishes from the array on display … it was easy. And an enormous amount of food for €10 a couple -(including beer and side dishes) we could hardly move.

After lunch we explored the area in and around the Ballaro market, a wonderful sprawling vibrant place with a wider ethnic diversity reflected in the stalls and food shops. We pounced on the opportunity to get garam masala and ground cumin spices, and marvelled at strange shaped vegetables and colourful fruit displays. Even during the quiet afternoon hours, the place was buzzing with activity and reminded me of the souks of North Africa, not much more than a few hours south of here.

We then headed to the catacombs of the Convento dei Cappuccini. It was a bit of a trek from the city centre, but good to walk off that lunch. The catacombs contain around 8000 bodies and were in use for several hundred years until the late 1800s, although there are some later than this. As we descended into the dark quiet vaults, we entered into another world. The world of the dead. The bodies were preserved by many different methods, and many of them were hung or propped up in niches in the walls in their best clothes, or uniforms or religious robes. Time has meant that many are decayed to skeletal remains, however there are as many that retain skin, hair and have contorted horrific expressions. Think of Munch’s painting, The Scream. Think of any zombie films you’ve ever seen. Think of Penny for the Guy. Think of your worst nightmare vision of judgement day not quite come to life but looking as it they might do any minute. It’s extraordinarily eerie, claustrophobic, and macabre. These were all once living breathing Sicilians though, and it seems almost an intrusion into their eternal rest to visit them.

Here is a quote of the thoughts of the prince while at a ball in Palermo from The Leopard by Tomasi di Lampedusa, set in the Sicily of the 1860s (edition, published by Vintage and translated by Archibald Colquhoun) “As always the thought of his own death calmed him as much as that of others disturbed him: was it perhaps because, when all was said and done, his own death would in the first place mean that of the whole world? …he went on to think that he must see to repairing the tomb of his ancestors at the Capuchins. A pity corpses could no longer be hung up by the neck in the crypt and watched slowly mummifying; he’d look magnificent on that wall, tall and big as he was, terrifying girls by the set smile on his parchment face, by his long, long white nankeen trousers. But no, they’d dress him up in party clothes, perhaps in this very evening coat he was wearing now …”

Sunday morning saw Adrian working on a few odd jobs on the van, so I headed into town to the Modern Art Museum. It was worth the €7 entrance, set in a 15th century palace that had also later been a convent, it covered Sicilian art history in the 19th and early 20th centuries and featured some tremendous landscape artists, such as Francesco Lojacono and Antonino Leto. It was rewarding to see images of familiar places from around the city especially a lovely oil of fishermen from Sferracavallo by Luigi Di Giovanni. The information in every room was full for once and translated into English.

Adrian joined me later and we strolled around the previously run down area close to the old harbour known as La Kalsa. My aged guidebook (Rough Guide to Italy, 2001 edition), describes it as run down and dangerous even in daytime. Since then it has become a haven to artists, a lot of renovation work has been and still is going on, and it is now up and coming and an interesting place to wander. We enjoyed the last knockings of the antique market, after a lunch at a local pizzeria, and watched the stalls pack up and move slowly and precariously off (Apes again).

Another ‘must do’ trip from Palermo is Monreale. A hilltown perched high above the city giving magnificent views across the entire bay, Monreale is most famous for its cathedral with its golden mosaics. Similar imagery to the Palatine Chapel in the Palazzo Reale in the city, but on a much larger scale. The exterior is simple and rough hewn but cross the threshold and be mesmerised. We had met an older man, Sergio, in the supermarket in Sferracavallo a couple of days earlier who had urged us to visit Monreale and to make sure we went up the tower. We duly did so and were far from disappointed – up the narrow stairs and across the open roof above the cloisters, then inside again and along a passage way with wooden shutters with spy holes into the church below – then outside above the transept and up more stairs to the tower itself high above Monreale with Palermo stretched out across the plain and mountains all around and right out to sea. A bit hazy but that didn’t detract from the height and space. 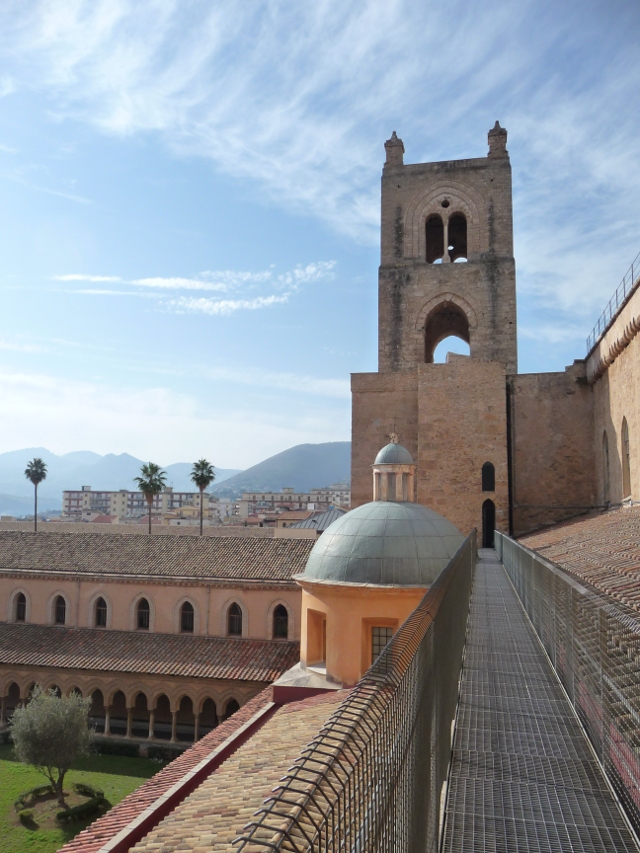 After 10 days, although we were tempted to stay longer, we felt it was time to move on. There is more that will draw us back to Palermo but in the meantime we’re heading for Cefalu.