Cinque Terre refers to the area around five villages which are wedged into coves or perch on cliff tops along the dramatic coastline between Levanto and La Spezia, east of Genoa. They are largely only accessible by train, boat or on foot, and supposedly keep their local skills and traditions going. It sounds so appealing and we’d long wanted to visit them. Unfortunately so has everyone else … We were surprised by the volume of tourists in this so-called off season period and from all over the world, particularly lots of Americans and Australians. Previously on the trip we’ve only really come across other European tourists.

We took the train from Deiva Marina to the furthest of the five, Riomaggiore, a village rising up the steep hillsides from a tiny harbour, with multicoloured houses – most now being gift shops. 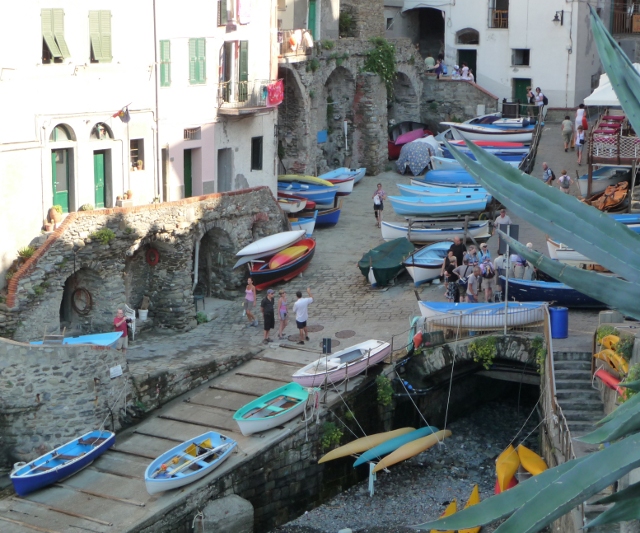 We walked westwards from here to Manarola. This was the most crowded stretch as it is the easiest, the coastal path being largely paved and flat. It is known as the Via dell’Amore, or lovers’ path, and it features many padlocks. We first came across the phenomenon of people putting padlocks on public railings, to symbolise their relationships, on a bridge in Seville a few years ago. Here they’d even erected extra wires to cater for this craze. However, it looked rather tatty in places as those who had forgotten to bring a padlock had tied bits of plastic bag to the wires. 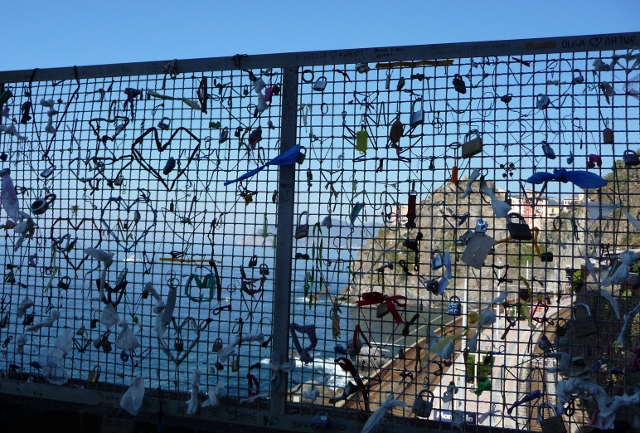 The path from Manarola to the next village, Corniglia, was closed due to landslides, but we could walk far enough out of the village to see that they weren’t joking and a large section of the path had disappeared. So we, together with many hundreds of other tourists, waited for the one train an hour to take us those very few kilometres. It was very hot. And the train was packed, recalling life as a commuter on the London tube. Some of the older people in the tour groups were obviously finding it difficult to cope with crowds, heat and gradients involved.

From Corniglia station you have to climb either a stairway set into the cliff up to the village or reach it via a steep winding road.

We took the latter option and found ourselves amongst the gardens and terraces where grapes for the local wine are grown, as well as vegetables. A tiny scarily makeshift monorail has been set up in order for the growers to reach these precarious parts of the hillside. 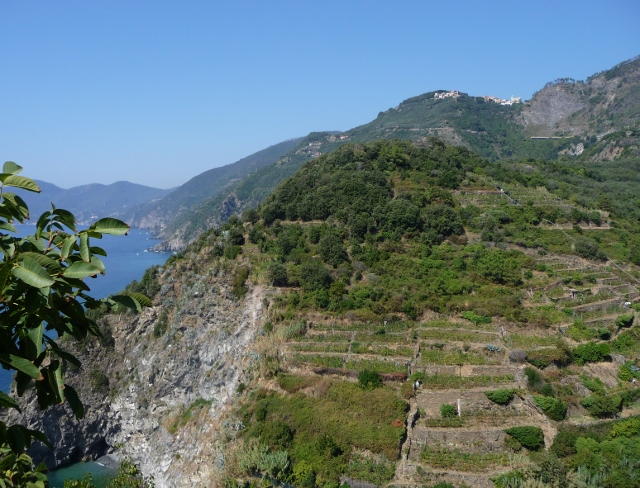 On reaching the village a welcome shop selling cold beers was our first stop and we picniced outside a pretty little church with a simple blue-washed interior. Because it is less readily accessible, there were far fewer visitors here and it had a relaxed sun baked ambiance. We later sat for a while in an outdoor cafe trying the local wine. This was definitely our favourite village.

From Corniglia the path wound out of the village through passageways and into olive groves, up and down hill around several headlands on uneven steps and stones. There was a lot of uphill and a lot of downhill too and it was heavy going at times.

The reward was the incredible views over the sea and coastline – spotting the villages in the distance. 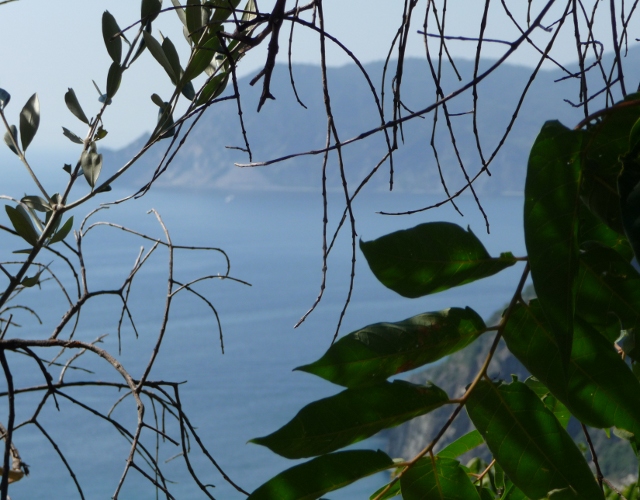 We took the prescribed 90 minutes to get to the next village of Vernazza. Hectic with sightseers, its castle presiding over the harbour crowded with people swimming in the water, this provided a welcome ice cream break.

The last leg, from Vernazza to Monterosso was the most strenuous, starting with an steep 180 metre climb out of the village and finishing with a painful descent of hundreds of uneven steps into Monterosso which seemed to take forever. There were long stretches where the path was incredibly narrow – barely an average person’s width – with a sheer drop on one side. Late afternoon by now, and we were grateful that there were far fewer walkers. Again, in spite of being comparatively slow, we took the prescribed time of two hours to cover this short 3 km distance. We pretty much hobbled into Monterosso and found a lovely restaurant for dinner. We had to rush for our train afterwards though, and we had cycled to Deiva Marina station from the campsite and it was uphill and dark on the way back. Free hot showers have never felt so good.

Sadly, only Corniglia came close to the promise these villages held for us – a remote gem of a place tucked high on its dramatic rock, still with its people eking out a living from the hillsides as well as from tourism. The other villages, or towns as they really are now, seem solely tourist hot spots. It’s hypocritical to be a tourist and yet hate the extremes that tourism has created and you can’t blame villagers for cashing in on tourism. We’ve touched on these themes before and will explore this further. In spite of being so touristy and receiving so many visitors, there is little attempt to provide adequate information such as a decent map of the walking trails – and you pay to use the trails. And, as ever, there are few public toilet facilities. As the Eagles sang ‘call someplace paradise, kiss it goodbye‘.

Following the road...
View all posts by EllieGee →
This entry was posted in By Country - Italy, Personal stuff, Travel stuff. Bookmark the permalink.