Deeper into the Auvergne

I am writing this while still stranded following our breakdown in the Dordogne (see post ‘Are we making your forecourt look untidy‘) but things are looking up now after a stressful few days of no progress and being without our home and transport. There will be a full update on the whole saga in the next day or so. In the meantime, we’ve got access to our photographs again now so have put images in a couple of the earlier posts, and I’ll now update you on our journey through the Auvergne.

After leaving Hérisson, our lovely hedgehog town, we continued south towards Montluçon. Another town not mentioned in the guidebook, but which a Dutch couple we got talking to had recommended. It is a larger, rather industrial town on the river Cher, but has a medieval historic centre. We followed the printed walking tour we picked up from the tourist office and whiled away a pleasant hour or so.

A cross country bimble took us into the more dramatic scenery of the Puy du Dôme area where long extinct volcanoes have created distinctive  mountains. On a previous trip we had driven up Puy du Dôme, the tallest of these, which was in a thick cloud at the time, and the weather was so bad when we got to the top that we didn’t make it out of the Dyane, so a bit pointless really. The road up is closed in August, and we didn’t feel like making the ascent on foot this time so we admired it from afar.

We enjoyed the mountains and gorges as we drove south through this volcanic area, punctuated by small towns in dramatic settings, often with ruined castles perched above them and churches and houses of dark volcanic stone. Most notably St Nectaire (famed for its cheese), and Besse – delightfully picturesque but not too spoiled by tourism. 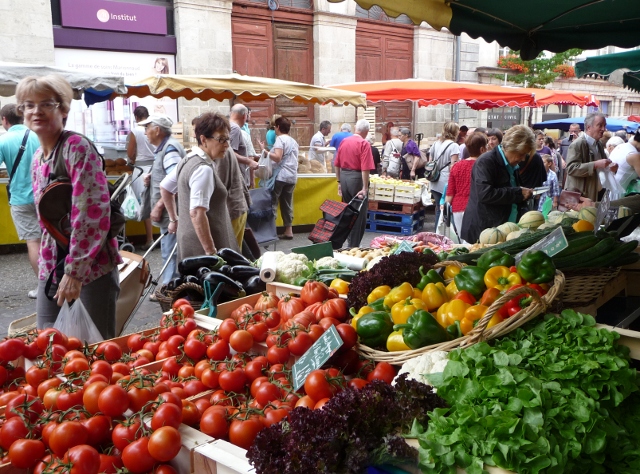 We pushed to make it to Le Puy-en-Velay for Saturday morning’s market, and it was worth it. A huge bustling food market thronged much of the older town with the best in fruit, vegetables and other produce that the area has to offer. It’s mushroom season at present and the damp summer means more wild mushrooms than ever and has seen prices for the prized ceps and girolles drop. 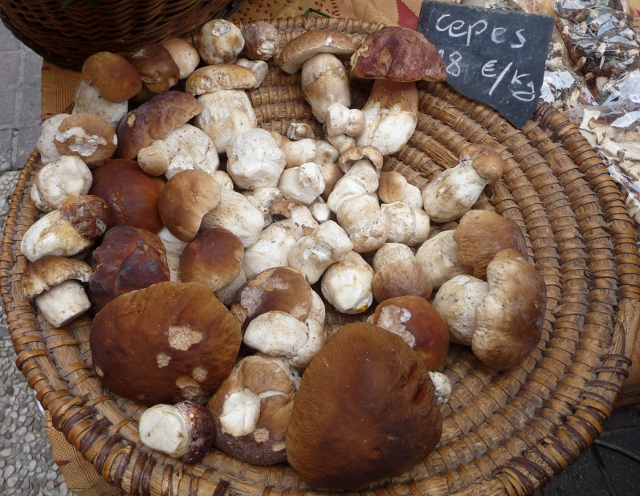 Le Puy is also famed for its lentils and we bought these as well as lots of other tempting goodies, helping ourselves to all the tastings on offer as we wandered. These included variations of some of the Auvergne’s great cheeses, tangy St Nectaire, Cantal – texture similar to cheddar and very tasty, Salers, and perhaps more widely known in the UK, Blue d’Auvergne.

Then it was time to see the rest of this intriguing city, which is one of the main starting points for pilgrims on the Chemin du Saint Jacques de Compostelle, El Camino de Santiago de Compostela (in Spanish), the path of which we’ve crossed many times now during and since our trip through northern Spain. 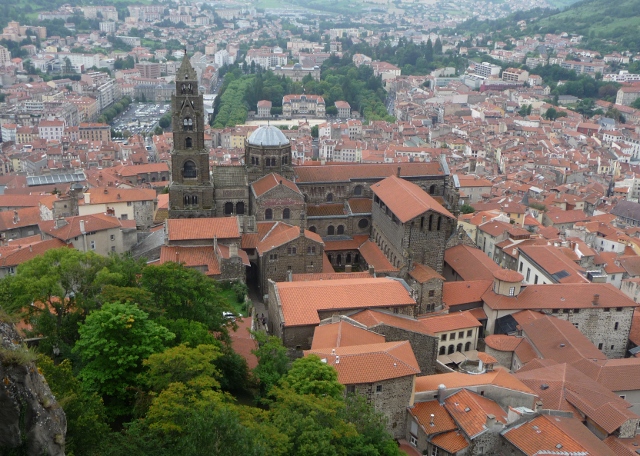 Le Puy’s cathedral, famed for its black madonna, is perched high above the city and you climb a steep street and sixty steps up into it. Literally. The steps take you into the middle of the cathedral from below, not the traditional front entrance. It does make an auspicious beginning for pilgrims beginning their long journey to Santiago. The cloisters also beckoned us as the heavens opened. The shower didn’t last long and we then climbed still further to the top of the volcanic rocky outcrop way above the cathedral to see the giant bronze statue of the Virgin Mary made from more than 200 melted down cannons taken at the siege of Sebastopol. You can also climb up inside the statue, and it was really odd to see people sticking their heads out of the windows in the statue’s robes. The view was magnificent – there are also several other rocky columns with statues or chapels on them in and around the city. Unfortunately, the dull weather meant our photos of the city don’t do it justice.

Returning to the lower city again, there was scarcely a sign of the market, and restaurants were busy putting out chairs and tables as fast as the square was being swept and pressure washed. A crêpe of chèvre, lardons and mushrooms washed down with cider was the perfect lunch after our climb.

Le Puy was the furthest south and east we intended to go on this part of our jaunt into the Auvergne, and we headed back westward towards the Margaride – another mountainous area of the Massif Central. The deep dark greens and blues of the scenery and the unsettled weather made it a good day to see the Mont Mouchet area – there was distinct air of foreboding around the place. 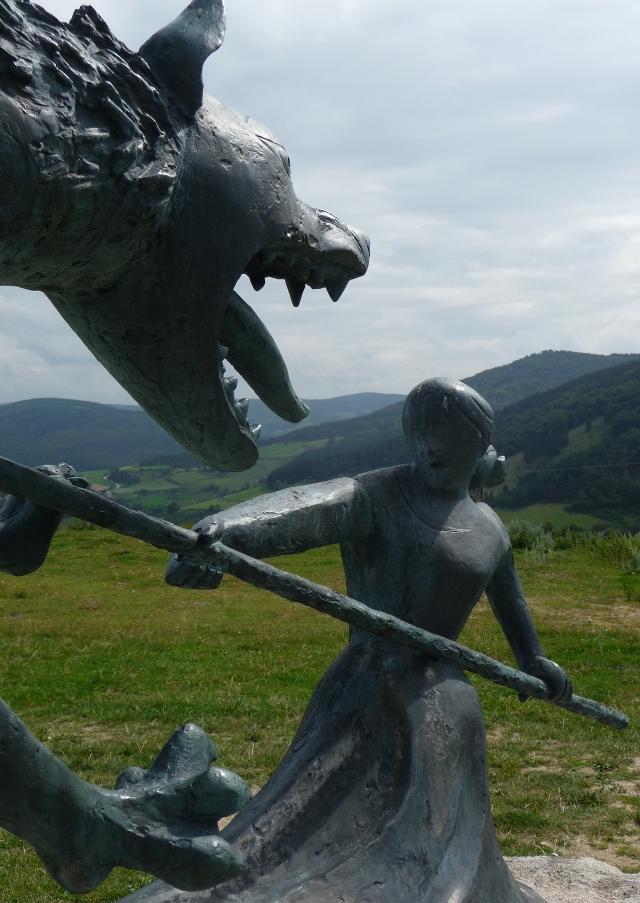 Secondly, we found out about the Battle of Mont Mouchet and parallels are drawn between the story of the Beast and that of the Battle. This whole area saw much Resistance activity during the Second World War and our eyes have been opened to the significant part played by the heroism of the Resistance and the ordeal of local people during that time. The war still casts long shadows here. 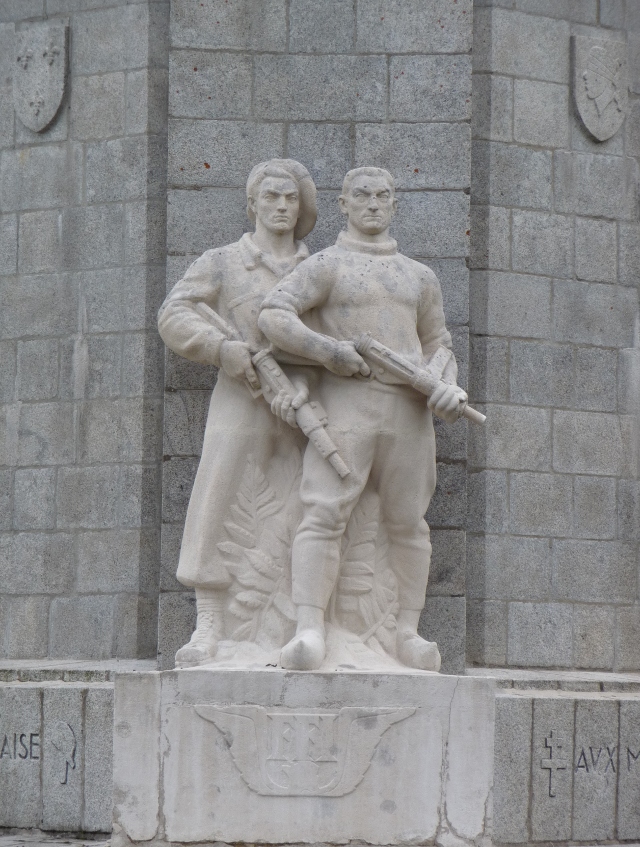 In June 1944, armed Resistance fighters – the Maquis fought for several days on forested Mont Mouchet to prevent or at least delay German forces from the south heading north to join those fighting back against the Allies following the Normandy landings. There were significant losses on both sides, but eventually the Germans captured and executed or deported many of the Maquis to concentration camps where lots of them perished.  We visited the poignant memorial and museum of these events.

Following the battle, the Nazis carried out reprisals on surrounding villages, including tiny Clavières, where we camped on a farm that night – cooking our market purchases: merguez sausages, Puy lentils, girolle mushrooms and haricots noirs, which disappointingly turned green when cooked, in our van. Another thunderstorm raged outside around us as if serving to remind us of the heroic and tragic events that happened here.

Following the road...
View all posts by EllieGee →
This entry was posted in By Country - France, Food stuff, Travel stuff. Bookmark the permalink.

2 Responses to Deeper into the Auvergne