A less thrilling entry to the city than when we arrived in Porto maybe but Lisbon proved to be the slow burning on and off again romance to Porto’s impetuous fling. A regal elegant capital, much of the centre of which was destroyed in the earthquake of 1755. The central Baixa district was rebuilt on gridlines and has several spacious squares. The older quarters, like Bairro Alto sit on slopes or escarpments above, some of them reached by scarily steep streets with elevadors – rickety old tram-like funiculars or turn of the last century lifts. These became a feature of our meanderings together with the old trams on active service such as route 28 which takes you on a switchback ride through the centre of town out via the narrow winding cobbles of Alfama district and out beyond Chiado to the west. These aren’t just tourist curiosities but serve as key transport services for all Lisboetas.

We spent our first day hopping on and off the 28 getting lost and found in the back streets, a late lunch at A Brasileira a notable art nouveau cafe with a statue of famed Portuguese writer Fernando Pessoa sitting at one of the street tables. The 28 later dropped us outside the Basilica da Estrela and we opened its doors to the sounds of an opera singer rehearsing for a concert later in the week. The singing in such a setting was incredibly beautiful and a welcome surprise. Another unexpected turn came when we found a tiny passage beside one of tombs at the rear of the church which lead us to a back room with the most incredible crib presided over by a very enthusiastic older nun. Dating from the 17th century, it showed the whole nativity story, complete with shepherds, kings, killing of innocents and characterful figures drinking and carousing in taverns. 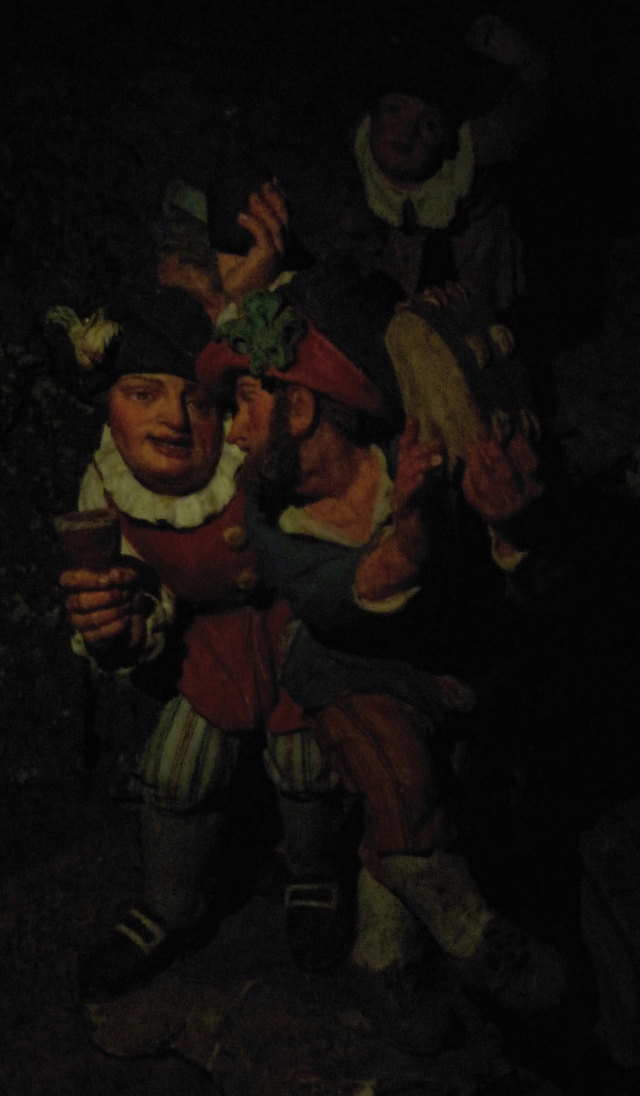 A large chunk of a day was spent at the Gulbenkian Museum – a must-visit on any trip to Lisbon. A spectacular collection acquired by Armenian oil magnate Calouste Gulbenkian who was welcomed to Portugal when World War II Britain no longer wanted him. Exquisite Egyptian statuettes, Roman glassware, an Assyrian relief, carpets, clothing, illuminated manuscripts from Persia and Turkey, ceramics too. Also furniture from the reigns of Louis XV and XVI and art includes works by Rembrandt, Fragonard, Gainsborough, Turner, Monet, Renoir, Burne-Jones, all shown in spacious rooms. We chilled out afterwards in the beautiful park surrounding the museum, with its secluded glades, multicoloured shade tent, and water areas criss-crossed by square stepping stones and ducklings.

We also loved the Azulejo Museum (Museu Nacional do Azulejo) housed in the church and cloisters of a former convent. Azulejos are the decorative tiles that adorn so many Portuguese buildings, large and small, both inside and out and have done for centuries. Typically blue and white, but also with other colours, the tiles form incredible artworks that rival Italian frescoes in their beauty and craftmanship. This museum gives an insight into the techniques around different types of tiles and features several floors of tiled images collected from around the country as well as its own azulejos, particularly in the magnificent church which forms part of it. The museum also features tactile examples of some of the images so that people with a visual disability can enjoy them too. 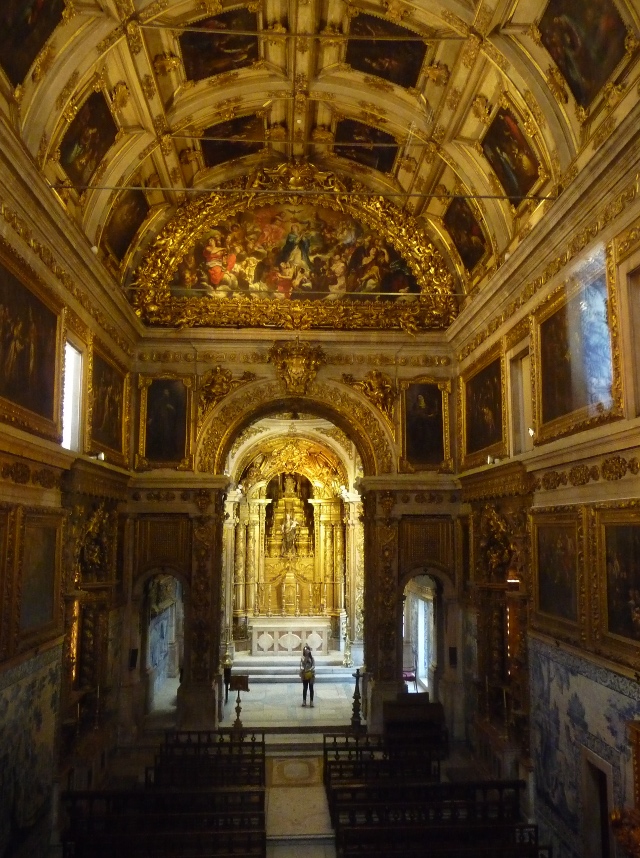 The district of Belém is famed for its ‘pastéis’ – small custard tarts which should be bought from the Antiga Confeitaria de Belém. This cafe trades on its 100 years of serving these secret recipe pastéis and has opened every conceivable azulejo-adorned room it can. The result is rather like a maze of canteens, getting more and more like a motorway services cafeteria as you go further in. We had breakfast there in one of the original outer rooms and it set us up for the day. We needed the energy to see Belém’s other sights – St Jerónimo’s monastery and church (Mosteiro dos Jerónimos) built in the rather frilly Manueline style – after King Manuel I (1495-1521). It’s a rich ornamental Portuguese version of late Gothic architecture we’ve seen many examples of on our wanders, but Jerónimo’s is thought to be the finest. Explorer Vasco da Gama who opened up the sea route to India is entombed here (his remains moved from the church in Fort Cochin in Kerala, round the corner from where I stayed earlier this year). We were disappointed in the extent of what we got to see at Jeronimo’s. For the price of €7 per person our visit seemed quite short compared to our three hours or so at Tomar’s Convent of Christ. Entry charges have formed a significant part of our expenditure in Portugal. 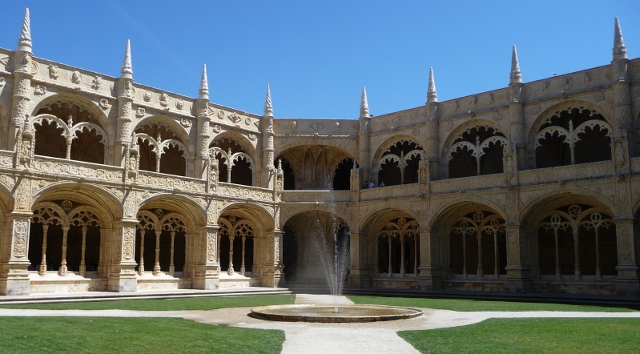 We loved the delicate Tower of Belém – set in the water close to the quayside with a Moorish as well as a Manueline influence. It was originally built to guard the port of Lisbon and sat in the middle of the river until its course was changed by an earthquake. 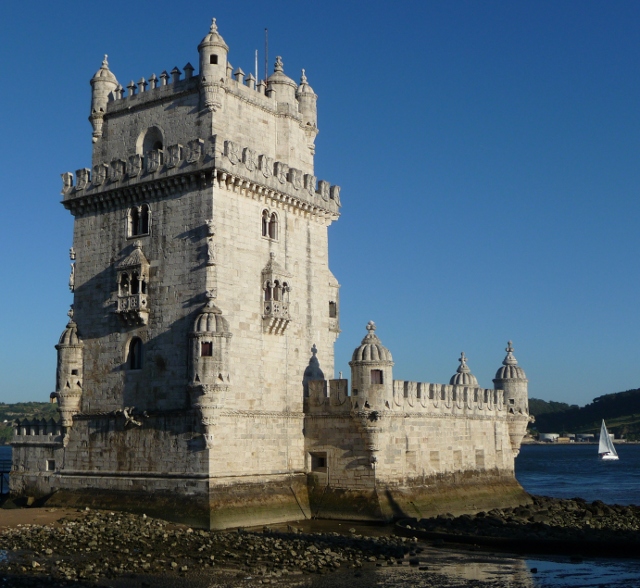 In all, we spent three full days exploring Lisbon and could have spent much longer. Our stay was interrupted by our trip ‘home’ for our friends Kim and Luke’s wedding in Derbyshire. The wedding itself was a very special celebration with much joy and laughter, and dancing until the early hours. Adrian contributed by being one of the ‘alternative’ evening bridesmaids. Congratulations again to the happy couple. It was a great few days and good to catch up with friends and family again, as well as stocking up on a few essentials. However, returning to home ground still felt overly familiar and it was confirmed for us that we were doing the right thing when we found we were referring to the van as home … not our actual house which is now rented out. It was good to return to Lisbon to find our van waiting safe and sound for us and not least for the weather, now wonderfully warm.

Following the road...
View all posts by EllieGee →
This entry was posted in By Country - Portugal, Travel stuff. Bookmark the permalink.